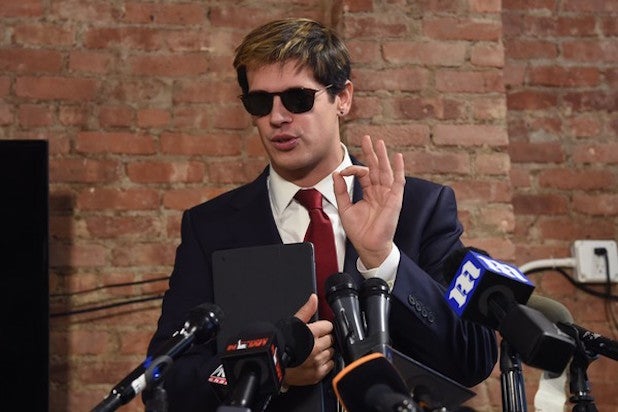 Milo Yiannopoulos is speaking out after the Daily Beast revealed that a man arrested this summer on charges of murdering his father had worked as one of his interns at Breitbart News.

“We quickly identified that he was bonkers and got rid of him,” the former Breitbart tech editor told TheWrap about Lane Davis, a 33-year-old former intern accused of stabbing his father, Charles Davis, to death last July in Samish Island, Washington. He did not say how long Davis had worked for him or the exact reasons for his dismissal.

According to the Skagit Valley Herald, Lane Davis told authorities that his father, “Chuck,” tried to kick him out of the house and “called him a Nazi and a racist,” which prompted him to stab his father in the chest repeatedly with a kitchen knife.

The Daily Beast reported this week that Davis was a former Yiannopulos intern — one whom the conservative firebrand suspects of being a key source for a March 2016 BuzzFeed story that reported Yiannopoulos relied heavily on interns during his tenure as Breitbart’s tech editor before he resigned under pressure in Feburary.

Shortly after dismissing Davis, Yiannopoulos said Wednesday, “Buzzfeed swooped in, as he’s their kind of source. He fed them a laughably fake story about 44 interns which they dutifully ran, apparently without irony, on April 1.”

(For the record, the BuzzFeed story is time-stamped March 31, 2016, and quotes Yiannopoulos himself: “Yiannopoulos confirmed in an interview with BuzzFeed News that he has ‘about 44’ interns — ‘a mix of paid and unpaid.'”)

The Daily Beast report painted Davis, as a lonely computer-addicting Trump superfan who spent most of his days spreading right-wing propaganda on Reddit and YouTube.

Davis was charged with one count of first-degree murder and is being held on $1 million bail. A trial has been set for January.