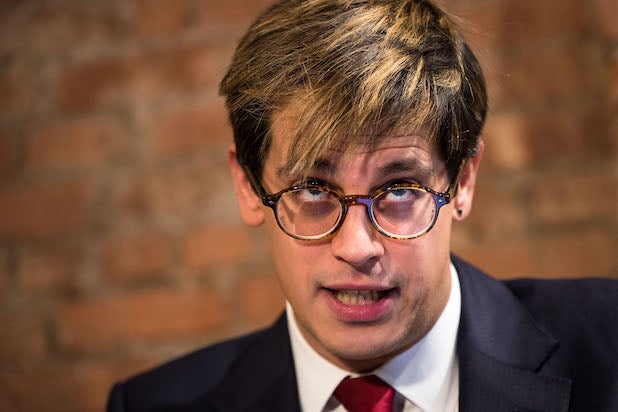 Disgraced alt-right darling Yiannopoulos, who earlier this week said that his self-published book had sold 100,000 copies on its first day of release, is now suing Simon & Schuster for backing out of a deal to publish the book earlier this year, TMZ reports.

The former Breitbart editor is asking for $10 million in the suit, which was filed Friday.

In his suit, Yiannopoulos accuses the publisher of caving to pressure when it 86’ed the publication of the book after video surfaced of him appearing to condone pedophilia.

Yiannopoulos contends that he denied multiple times that he was condoning pedophilia in the video, in which he said some relationships between adults and 13-year-olds are consensual and joked that being molested had made him good at oral sex.

The suit contends that Simon & Schuster was initially drawn to his reputation as an “outspoken and controversial Breitbart columnist and blogger” when it struck the deal with him in December, but backed away after the outcry over the video, deeming the book “unacceptable for publication.”

According to the suit, Yiannopoulos was allowed to keep $80,000 of a $255,000 advance, but he believes that was a bone thrown to him by Simon & Schuster in an effort to avoid a lawsuit from Yiannopoulos, TMZ reports.

“Simon & Schuster’s termination of the [sic] Yiannopoulos’ book contract had nothing to do with the content of the Dangerous manuscript, and everything to do with the firestorm of controversy around Yiannopoulos, his well-known reputation for political incorrectness, and Simon & Schuster’s announcement of plans to publish his book,” the suit reads, according to the New York Daily News.

In a statement to TheWrap, Simon & Schuster characterized the lawsuit as “publicity driven and entirely without merit.”

“Although we have not been officially served, we believe that Yiannopoulos’s lawsuit is publicity driven and entirely without merit,” the publisher said. “Simon & Schuster will vigorously defend itself against any such action, and fully expects to prevail in court.”

In addition to filing the suit, Yiannopoulos held a rally and protest outside of Simon & Schuster’s offices in New York.