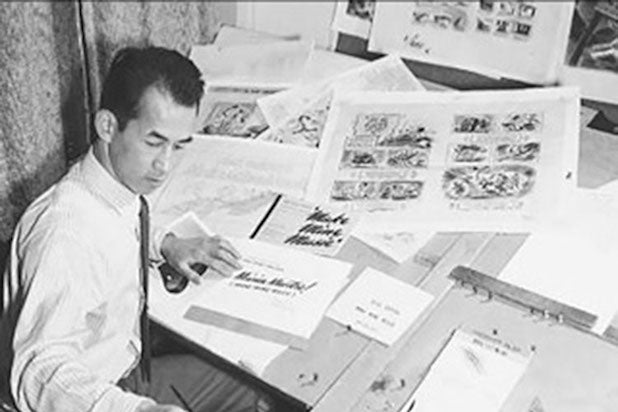 Milton Quon, one of the last surviving members of the animation team during the Walt Disney Studios golden age, died at his home in Torrance on June 18, his son, artist Mike Quon said Tuesday. He was 105.

Born in Los Angeles to Chinese immigrants in 1913, Quon was hired by Walt Disney Studios in 1939 and got his start in animation on the studio’s legendary classic “Fantasia.” Quon’s work could be seen in the “Waltz of the Flowers” segment, where fairies bring changes to the season in a peaceful forest to music from Tchaikovsky’s “Nutcracker Suite” plays.

Quon then served as first assistant animator on “Dumbo” in 1941 before leaving Disney after the U.S. entered World War II. During the war, he illustrated repair manuals for aircraft used by the U.S. Army. Afterwards, he returned to Disney and became head of the studio’s publicity department, illustrating promo material for films like “Song of the South.”

His work on those films led him to become the first Chinese-American art director at a national advertising agency after being hired by firm BBD&O in 1951. He later taught courses at Los Angeles Trade Tech College in drawing and advertising from 1974-89.

After retiring from advertising, Quon returned to Hollywood and found some roles as an extra in film and TV. His most notable role came in the 1994 action film “Speed” as one of the unfortunate passengers on a bomb-rigged bus that Keanu Reeves and Sandra Bullock must keep moving faster than 50 miles per hour.

Among Quon’s many honors, from 2001 to 2002 he was featured in the group show “Inspiring Lines: Chinese American Pioneers in the Commercial Arts,” a traveling exhibition sponsored by the Chinese American Museum. In 2005, the museum featured his art in a retrospective solo exhibition, and in 2017, it awarded Quon the Historymakers Award for “Excellence in the Arts.”

Quon was also one of five Chinese-American artists featured in the Getty’s Pacific Standard Time Initiative’s “‘Round the Clock: Chinese American Artists Working in Los Angeles” in 2012. And in 2013, Quon was honored by the Chinese Historical Society of Southern California with their Golden Spike Award.

Quon is survived by his wife, Peggy, his four children Mike, Jeff, Tim, and Sherrill, and four grandchildren.