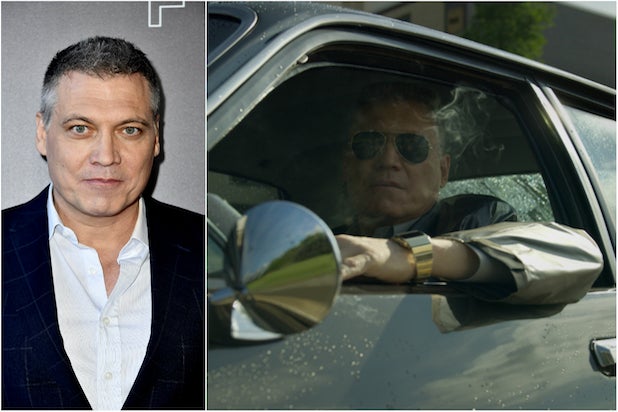 One very unexpected reaction to the second season of Netflix’s “Mindhunter” came from a subset of fans who declared FBI agent Bill Tench, played by Holt McCallany, a sex symbol.

Mel Magazine called Tench “The Unlikely Hearthrob” of “Mindhunter.” Clips like this compilation of McCallany speaking French, and this Tench supercut, have been widely shared on social media. Refinery29 writer Elana Nicolaou even dubbed the fandom “Tench wenches.“

That’s a lot of love for a character McCallany himself describes as a “chainsmoker with a buzzcut,” and while the actor says he’s “very flattered,” he also tells TheWrap the whole thing has him “deeply surprised.”

“Where were all these young ladies when I needed them?” McCallany joked.

In “Mindhunter” Tench, a fictional character loosely based on real life FBI agent Robert K. Ressler, is part of the FBI’s Behavioral Science Unit in the 1970s and 80s that developed the concept of criminal profiling. In season 2, Tench has to balance the demands of his job investigating the Atlanta child murders with a growing crisis at home — read more about that here — that ultimately fracturing his marriage to Nancy (Stacey Roca).

It was McCallany’s portrayal of Tench amid that family crisis that fans particularly latched onto, something McCallany gets.

McCallany says his performance, developed with “Mindhunter” executive producer David Fincher, was partly based on his own father, Michael McAloney, Tony Award-winning producer of 1970’s “Borstal Boy.” “I’m not playing my father, but he was also one of those guys who was a heavy smoker, who had an acerbic quality,” McCallany said.

Also Read: What Is 'Mindhunter' Trying to Do With These BTK Killer Vignettes?

As for that sex symbol talk, “I just don’t know what to say. I’m very flattered, but deeply surprised.”

Asked why he thinks fans have embraced the character, McCallany told TheWrap “there’s something noble about the classic American male of a certain era. I think that in certain ways we’ve gotten away from that. I still believe in all of that. Chivalry is not dead.”

Meanwhile, if you’re asking, McCallany knew about the ‘Tench wenches’ before the interview. Barely.

“Somebody brought this to my attention literally within the past 48 hours. Ignorance is bliss,” he said.