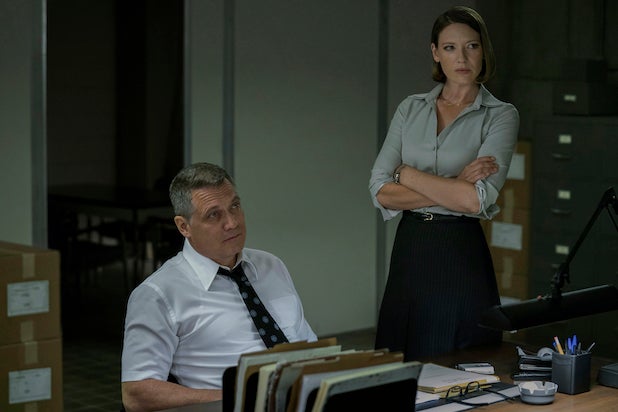 The star of the upcoming Netflix crime drama “Mindhunter” says one of the reasons the true crime has become such a popular genre is thanks to viewers’ growing fascination with people who commit “heinous crimes.”

Sadly, on the heels of Sunday’s mass shooting in Las Vegas, along with a growing frequency of mass shootings, perpetrators of such horrific acts continue to embed themselves into the cultural consciousness.

“[Sunday night] there was a guy named Stephen Paddock who killed 59 people and injured over 500 in this unbelievable mass murder. So it’s not as though we live in a world where these crimes are a distant memory,” Holt McCallany told TheWrap in response to a question about the popularity of the crime genre.

McCallany (“Fight Club,” “Alien 3”) plays an FBI agent in the late 1970s who is at the forefront of profiling criminals. Loosely based on famed FBI agents John Douglas and Robert Ressler — the show covers serial killers, as two agents (the other played by Jonathan Groff) learn their motivations by conducting in-depth interviews with criminals.

McCallany drew comparisons between deadly mass shootings and the rise of true crime content: “So why are people fascinated by it? I think in part it’s because it’s unfathomable to them, on a certain level. How can somebody commit these heinous crimes?”

While the Las Vegas shooter, 64-year-old Paddock, was not a serial killer — as is the focus of “Mindhunter” — there could be similarities in motivation, McCallany suggested. (Law enforcement are still investigating what sparked Paddock’s shooting spree.)

“When you really start to go down the road of saying, what are the psychological underpinnings of homicide, you enter a really dark world that is foreign to us,” McCallany said.

“We don’t think like that. But these men do, and I think that’s what fascinates us — it’s because they’re so different from us,” he said. “We have difficulty understanding how they do what they do.”