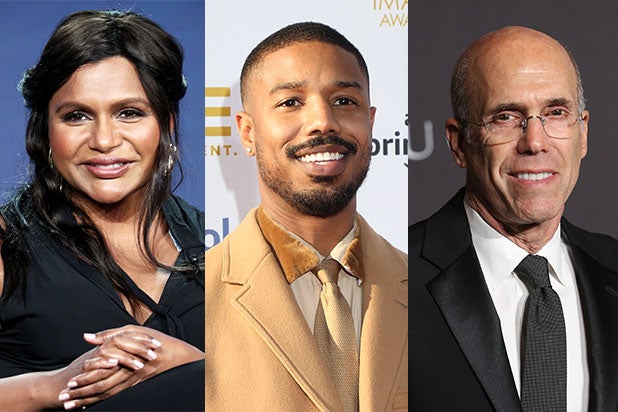 Mindy Kaling, Michael B. Jordan, Jeffrey Katzenberg and Danny DeVito are among those who have been added to the speaker lineup of the 2019 Produced By Conference.

The Producers Guild of America (PGA) also on Tuesday announced its headlining sessions for the 11th annual conference, which will include a conversation with Warner Bros. heads of film and television Toby Emmerich and Peter Roth, as well as “360 Profile: When They See Us,” which will feature Ava DuVernay, Cindy Holland, Jane Rosenthal, Jonathan King and Berry Welsh.

The 2019 Produced By Conference will be chaired by PGA members Betsy Beers, Ian Bryce, Tracey Edmonds, Mike Farah and Gene Stein. Produced By will feature panels, Q&As and mentoring opportunities.

This year’s conference will take place on June 8 and June 9 at the Warner Bros. Studios lot.

See the new additions below.

-Conversation With: Toby Emmerich & Peter Roth
– Conversation With: Mindy Kaling & Nancy Meyers sponsored by Delta Air Lines
-Conversation With: Michael Douglas & Danny DeVito
-Conversation With: Jeffrey Katzenberg & Meg Whitman
-360 Profile: When They See Us featuring Ava DuVernay, Cindy Holland, Jane Rosenthal, Jonathan King, Berry Welsh
-The New Age of Producing Horror
-Content with a Conscious: Social Impact Entertainment Across All Platforms
– The Art & Craft of Pitching
-The Keys to the Kingdom: Financiers & Distributors
-TV: Meet the Buyers
-The Streamers: Meet the Buyers
-Power of Podcasts: The Latest Way to Extend Your Story
-Live Entertainment Evolved: Scripted, Interactive and Beyond sponsored by Blackmagic Design
-Representation for Everyone: Why It Makes Sense Now More Than Ever sponsored by Freeform
-The Integrated Data-Driven Production: Efficiency, Economy and Quality sponsored by Cast and Crew
-The Collaborative Balance: Creativity, Cost & Technology sponsored by Panavision