Oscar-nominated actress Minnie Driver laments that news and entertainment outlets continue to “distill” her to her previous romantic relationships with men rather than focus on her career, a fact which she pointed out in a Saturday morning tweet calling out The UK Times.

“It’s so curious that my life still seems to be presented merely as an adjunct to the men I’ve dated,” her tweet read. “I had such a great+interesting conversation with this journalist — sorry the distillation came down to dudes.”

The piece, which includes an excerpt from Driver’s recently released memoir, “Managing Expectations: A Memoir in Essays,” has the salacious headline: “The Director Told Me: ‘Fake an Orgasm. Unless You Fancy Having a Real One.” The subheadline adds, “The actress on fame, the toxic film industry and how she survived.”

“Read my book. That, is actually me. If you’re interested,” her tweet concluded and ended with a link to where fans can pre-order both the UK and US versions of the book. 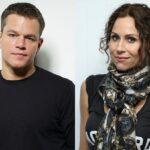 On Thursday, Entertainment Tonight also ran an exclusive excerpt of the “Good Will Hunting” star’s memoir — picked up by other publications like People — which focused on Driver’s romantic relationship with costar Matt Damon, as well as its “combustible ending,” attributed to his very public announcement that he was single on “The Oprah Winfrey Show.” Not only was that news to Driver, but it subsequently became tabloid fodder in the late ‘90s.

“There’s a guy who’d been sent, the cameraman at the Academy Awards — he’d literally been told to stay on me and, like, he was so in my grill, he was like a wildlife photographer waiting for the kill,” she recalled of the relationship’s media-frenzied fallout. “He was just waiting for the moment that I was going to break or something was going to happen, or I was going to get up and scream. He’d been told, ‘Stay on her, bud. Something’s gonna happen.’”