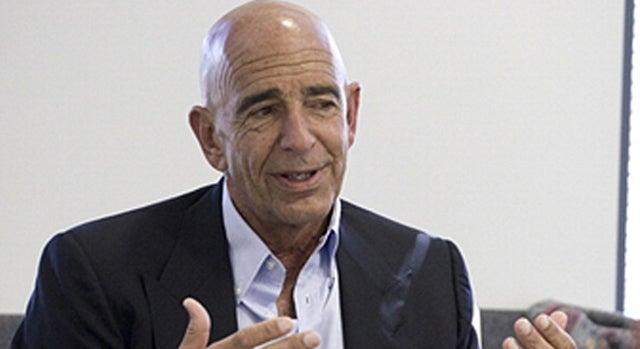 Miramax will soon produce a few films and TV series a year and is looking to acquire both film production companies and libraries, new Miramax chairman Tom Barrack told TheWrap.

The head of Colony Capital, primary investor in Miramax the past three years, took control of the indie company earlier this week after former chairman Richard Nanula resigned amid unsavory allegations. Colony initially focused on monetizing Miramax's library of films like "Shakespeare in Love" and "Swingers" produced with Harvey and Bob Weinstein at the helm, but Barrack promised that that is soon going to change.

He said the library is still the company's "cash cow," especially given the rise of companies such as Netflix and Amazon, but acknowledged the need to get back into production for both the big and small screen.

"In order to get the best value for films in our libraries, we need new product and the scent of new films to attract distributors," he told TheWrap.

He also joked about being a coward, saying Miramax would dip its toes back into production through joint ventures.

TheWrap spoke with Barrack about why the future of Miramax is as much in TV as film, its prudent approach to production and what acquisitions could be on the horizon.

How does your becoming chairman and the scandal surrounding Richard change Miramax?

We've already owned this company for three years. In that sense, I've been controlling the company. Richard was a principal in Colony and with portfolio companies we assign principals to be responsible. Richard reported to me so in essence I always had ultimate responsibility for those kinds of macro decision.

What is your vision for the company's future?

We're through the first trimester of our growth. Part of the confusion in the industry was that everyone was hoping and expecting to see us continue our great legacy of independent film production that the Weinsteins had given birth to.

We hoped we'd be able to, though not as well as they did. That was a dynastic era in which they developed those 750 films.

What we did and needed to do was stabilize and take advantage of the library that had not been well marketed for the previous five or six years. Disney is an unbelievably great company, but the Miramax product didn't fit within the Disney niche. We didn't want to jump into production until we understood the existing farmland.

And now you're looking to produce films?

In order to get the best value for films in our libraries, we need new product and the scent of new films to attract distributors. Between foreign and streaming or the cadre of all the different mediums now available, we decided we're going to judiciously start to produce and co-produce episodic TV and independent films.

We'll also look for other libraries to acquire, other companies to acquire and merge with. We attempted to acquire Summit and Lionsgate outbid us in that endeavor.

But you're not looking to sell Miramax?

No, we're not looking to sell. Quite the opposite. I think Miramax in the engine.

How can Miramax re-enter film production?

There are tremendous opportunities for independent, well-financed films that are not dictated by a conglomerate. We're not necessarily just going to make independent movies or just independent movies for theatrical exhibition. Other pieces of the industry are getting better and better. We're all constantly amazed by what's happening with technology and the demand for different kinds of content and how it gets produced.

The battle between Amazon and Netflix will produce streaming opportunities that you can't even find today.

Also read: 'Pulp Fiction,' 'Good Will Hunting' and Other Miramax Films Come to Hulu Plus

Is episodic TV an even bigger part of Miramax's future than film?

We have an irreplaceable film library and great relationships that result from us being able to distribute that product. But in this business, if you don't go to where the puck is going, if you just focus on where the puck is at, you are going to be dead.

That being episodic TV and streaming video online?

What have you done so far with the library and what do you need to add to bolster it?

Part of the criticism at time we acquired Miramax was DVD business was dead and revenue would decrease. By luck, not because of our brilliance, the exact opposite was true with the multiplicity of venues searching for content — HBO, Starz, digital, streaming, foreign distribution — far exceeding expectations not through DVD but other avenues.

There are a lot of libraries that have existed in traditional hands that have not availed themselves of that marketing and distribution avenue. In order to market old libraries, we need new films so we can entice those buyers. If we can go buy libraries and add value, that's good business.

What libraries do you see sitting out there waiting to be turned into profitable enterprises?

Individual producers who had studio deals where they kept their own libraries. Some of big new co-investment vehicles doing tentpole movies with big studios that have pieces of those libraries.

No one has been focused on the libraries and lots of libraries are there. It's just about understanding what they are. Intellectual property owners will be the real estate magnates of the future. It's where billions will be made.

Do you have the tools now to produce new intellectual property or will you have to go out and buy it?

I'm a total coward. Knowing that we don't have a capacity, the  way we start is through joint ventures. We take our distribution, capital and product and join with someone who has the team recruited already and on the field. We're not trying to build a bicycle and ride a bicycle at the same time.

We have great people at Miramax today but not the production ability. Whether we do that through buying, merging or hiring individuals, we'll find out as we go.

We're using cowardly approach and saying we can find the best of class partners to do this with.

Will you just remake films from your library or also generate new IP to buttress the library?

Both. Over the last three years we have been surgically examining what we have and amazingly didn't know what we have.

There are a lot of great products started by the Weinsteins that we still own and a cadre of development deals that we can go forward with.

Who are some of those people you have deals with?

I don't want to go into specifics, but were in the middle of negotiations on a lot of these things. You've seen some of these, like "Gangs of New York" for Martin Scorsese with episodic TV. We're venturing out into the middle of a "Bad Santa" sequel.

That's one easy place to go, and the other one is that there is no place for independent films to go today. We're actively saying how do we get into that stream? Is it really reading scripts for someone like us? We're a long way away from our ability to make films. We're much better off further down the food chain in the production of a movie.

I have a very antiquated view. Theatrical exhibition will always be nirvana. Having said that, that main focus may be the least economically viable piece five years from now. There may be a menu of other options, which are much more viable.

But the library gives us a simple business plan. It's a cash cow. We're not sitting here losing sleep saying, "Oh my God I hope they like 'King Wasabi' because if we don't we're having a really bad year."