Mischa Barton is on a boat — but the real waves she made on Thursday were felt on social media.

The former star of “The O.C.” was eviscerated after posting an Instagram tribute to Alton Sterling, who was killed by police in Baton Rouge, Louisiana, earlier in the week.

“I’m truly heartbroken to watch videos like the #altonsterling execution. This may have been going on forever in the United States but thank god the pigs get caught on camera now. It is unthinkable and an embarrassment to America. The country I grew up in,” the actress wrote. “Somebody make change. We need gun control and unity. And a real President so think about that when the election is around the corner.”

It wasn’t the message that drew the Twitterati’s wrath, however, but rather the photo accompanying the post, which depicted a bikini-clad Barton basking in the sun while on a boat.

To add a further layer of irony to the mishap, Barton ended her message with “#act appropriately.”

The post was eventually deleted, but not before social media users got a hold of it and chewed into Barton like a lump of raw, bikini-clad meat.

“Mischa Barton came riding in on her giant high horse of white privilege. Glad she got good lighting on the pic,” one detractor wrote.

“I’m hoping this was an intern who pulled the wrong pic for a precooked statement,” offered another, who added, “#wtfmischa.” 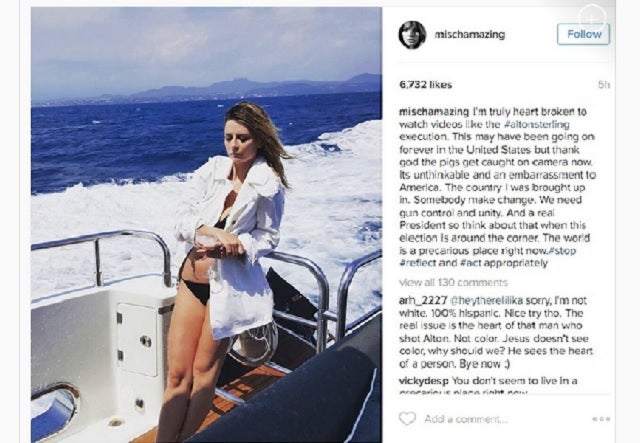 “Thank you Mischa Barton for providing a good laugh to everybody during these trying times,” yet another offered.

“Mischa Barton is a joke,” wrote yet another. “Like why do people do ignorant stuff??”

A spokesperson for Barton has not yet responded to TheWrap’s request for comment, possibly because the actress has jumped into the ocean and is swimming for bottom out of embarrassment.

Mischa Barton came riding in on her giant high horse of white privilege. Glad she got good lighting on the pic… https://t.co/O9eKUsMxym

LMAO Mischa Barton posted a pic on her yacht and captioned it talmbout she’s sad and stuff.

I’m hoping this was an intern who pulled the wrong pic for a precooked statement #wtfmischa https://t.co/qHFJKKdtB6 pic.twitter.com/cczCZ9MnQd

Thank you Mischa Barton for providing a good laugh to everybody during these trying times https://t.co/d5kcL7mHfi

Mischa Barton is a joke. Like why do people do ignorant stuff??

Mischa Barton is sick and tired of the police shooting at her yacht. pic.twitter.com/tbZTwmuXUF