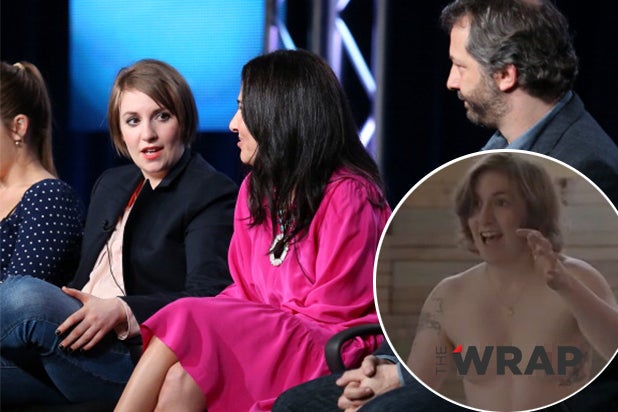 I think “Girls” is a great show. And furthermore, I like girls. I don’t hate them. But I do challenge the notion that asking a writer about her bold creative choice might somehow imply that you’re a sexist, or a misogynist.

Last week, TheWrap’s TV editor Tim Molloy asked Lena Dunham about the show’s nudity during a “Girls” panel. She and executive producer Judd Apatow didn’t like his question, and Apatow asked Tim if he had a girlfriend. Yes: Me. Another executive producer, Jenni Konner, speculated that I might be “a misogynist,” though I wasn’t at the panel and we’ve never met.

Since they asked, here’s what I think.

Having spent many years in New York, I relish the show’s depiction of the city. When the show is at its best, I become absorbed in it.

And then Dunham’s Hannah Horvath plays topless ping pong, and I’m jolted out.

Not because Hannah’s nakedness is off-putting, or unattractive. Because it’s neither of those things. It’s just inexplicable at times and takes me out of an otherwise compelling story.

The issue isn’t that her particular character is naked. I’d feel the same way if Marnie, Adam or Ray ate a cupcake naked in a bathtub. It just doesn’t seem to make sense from a storytelling or character perspective, unless she’s supposed to be more eccentric than Kosmo Cramer, Latka Gravas or Steve Urkel. Or maybe her incredible body image and self-confidence primarily manifests itself in sporadic nudity.

Whatever it might be, I have no doubt Dunham and the other writers on the show have a very specific reason for the nudity. And yet, the one that Dunham gave Tim – it’s a “realistic expression” of life, doesn’t ring true. I’ve never taken naked baths with pals or seen a nudie line outside Magnolia Bakery. But maybe I’m hanging with the wrong people.

I was perplexed by Dunham’s response – “If you are not into me, that’s your problem.” A TV critic wanted to understand why a TV character is naked at odd times. How’s that suggesting he finds the actress Dunham unattractive? How is that an insult to her as a woman? How is it sexist?

To be fair, Tim’s question may have been misinterpreted. When framing it, he referenced the nudity in Game of Thrones, calling its purpose salacious and titillating. Even if Dunham thought he implied Girls’ nudity isn’t titillating, why not explain its true purpose instead of taking a stance that’s counterintuitive to the empowerment and liberation of her show?

Sure, it’s not as simple to compare Hannah being naked to Hannah sporadically eating a meatball sub or Hannah playing an accordion or Hannah clipping her toenails, because the notion of female nudity is incredibly charged. But if she was doing any of those things, it would seem like a stunt or a non-sequitur. From a simple narrative point of view, it’s a simple question: what does her curiously placed nudity mean?

When it’s at its best, we watch TV to learn what motivates our favorite characters. We watch TV to feel something — to well up, or smile, or scream. We watch TV partly to learn. Tim asked a question to learn something. I’ve wondered about it, too.