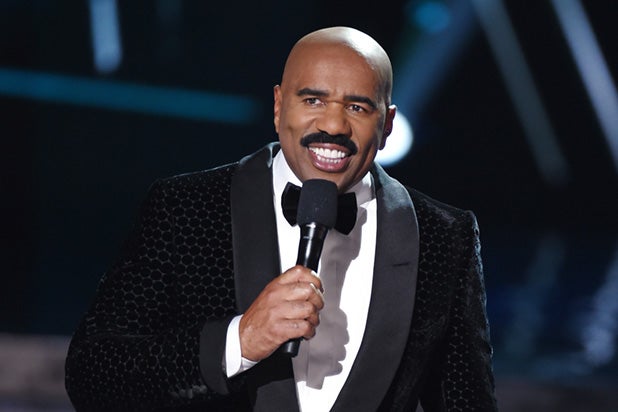 “Miss Universe” host Steve Harvey might not have many friends in Colombia, but Hollywood executives and pageant brass are still on his side.

Higher-ups from the “Miss Universe” production want Harvey to return as host for next year’s live show, which is expected to stay at the Fox network, according to an individual familiar with terms of the deal.

WME-IMG Chief Content officer Mark Shapiro said Harvey is “absolutely” welcome to return as host for the pageant, which was sold to the entertainment company by Donald Trump in September.

“If anything, I’m sure FOX would support it, because as I said, he did a great job. He was funny, he was informative, he’s high energy, he’s got a great following,” Shapiro said in an interview with radio host Jim Rome.

“I definitely want him back, and I would hate to see him not come back. He’s going to want a shot to redeem himself,” Shapiro said. “Look, the world forgives, the world forgets. It could happen to the best of us. He was so well intended, and he’s such a good guy, and it was really such a mistake that I hope people don’t hold this over him other than for just a good laugh and let it pass.”

On Sunday evening, Harvey incorrectly named Miss Colombia as the winner of the Miss Universe crown — who in fact was the first runner up, behind actual victor Miss Philippines.

How hard Harvey worked is up for debate.

His attendance at rehearsals was the subject of a Monday story suggesting that the talk show host and comedian missed a “crucial” part of an earlier run-through, according to a report by Entertainment Tonight, resulting in the name flub and subsequent scandal.

Right after the mix-up, Harvey did a mea culpa on Twitter, saying, “I’d like to apologize wholeheartedly to Miss Colombia & Miss Philippines for my huge mistake. I feel terrible.”