We live in our bodies every second of our lives, and yet we sometimes have terrifyingly little control over them.

Bonding over this mutual fear is at the heart of “Miss You Already,” a cancer melodrama, focused on two late-thirtysomething best friends, that singlehandedly elevates the genre through its emotional complexity, its medical candor, and its openhearted willingness to laugh no matter the situation.

BFFs since grade school, Londoners Jess (Drew Barrymore) and Milly (Toni Collette) are together in crisis at the start of Catherine Hardwicke‘s film. Do-gooder Jess encounters fertility issues when she and her boyfriend Jago (Paddy Considine) try for their first child, while rock publicist Milly, already the mother of two, is diagnosed with breast cancer. Happily, Jess soon finds herself with child, but Milly’s eventual remission proves short-lived.

The neat polarity of Jess and Milly’s diametrically opposed fates belies how powerfully intimate, authentic, and lived-in their journeys turn out to be. Long known for her adolescent-centric fare like “Twilight” and “Thirteen,” Hardwicke achieves an emotional breakthrough here by working with her most experienced cast ever. (In interviews, the filmmaker has been frank about borrowing from her personal experience of watching her father’s battle against cancer.)

Unlike so many of the female invalids we see delicately dying on screen, Milly is humanly selfish and vain, bordering on petulant, as a patient. She’s the kind of woman, after all, who sports elaborate eye make-up and a funky leather jacket with spiky Grace Jones shoulder pads while explaining chemo to her young kids. After four decades of rapt male attention, her struggle to accept the necessity of her double mastectomy is as heartrending as her iron-jawed determination to have her head shaved (by the legendary Frances de la Tour in a cameo) is inspiring.

In the best role she’s had in years, Collette reminds us what makes her so magnetically vulnerable and quietly unpredictable, especially as Milly’s marriage to her baby-faced, ex-rocker husband Kit (Dominic Cooper) becomes strained once intimacy and physical attraction are suddenly diminished by medical treatment. Nor is Milly’s rocky relationship with her actress mother (Jacqueline Bisset in a bleached-blond bob) a source of reliable comfort. 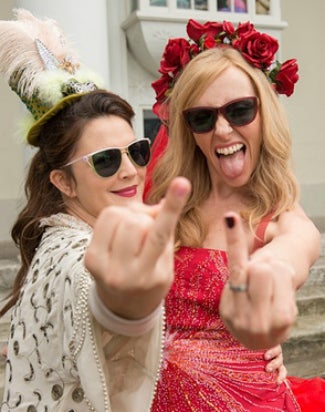 There’s perhaps no better advertisement for female friendship than when Milly reveals to Jess what she doesn’t have the guts to show Kit: the two furious red scars that run across her chest after her surgery. But Morwenna Banks’ screenplay features a relationship that’s both idealistic and realistic. In her time of need, Milly becomes a more difficult wife, daughter, and friend to deal with. During an impromptu getaway between the two to the moody moors immortalized in “Wuthering Heights” — no prim Austen tomes for this bohemian pair — Milly commits a profound betrayal that accidentally endangers both Jess’s pregnancy and the solidity of their friendship.

Barrymore has much less to do, particularly with an overextended storyline about her reluctance to tell Milly that she’s pregnant because she doesn’t want to point out that the rest of her life is going well, or that Milly won’t be able to watch her best friend’s child grow up. But the beaming Barrymore is essential to what makes the film exhilaratingly good-natured: its sense of humor. Virtually every scene features a laugh-out-loud joke — a few improvised by the actresses — that prove nearly tonally flawless and cement the friendship between Jess and Milly as one for the ages.

Unflinching yet unburdened, “Miss You Already” is like the best kind of hug: warm, reassuring, cathartic, and a fleeting but vital reminder that there’s at least as much good in the world as there is bad.