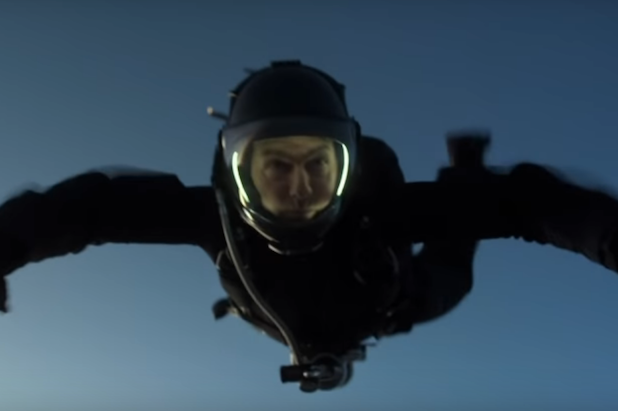 Paramount’s “Mission: Impossible — Fallout” has held on to No. 1 at the box office with a second weekend total of $35 million, bringing its domestic run to a ten-day total of $124 million.

After posting the best raw opening for the long-running Tom Cruise action series, “Fallout” is now 15 percent ahead of the pace set by “Mission: Impossible — Rogue Nation” three years ago. This means that the film is on track to become the first Paramount release in four years to gross over $200 million domestically, the last being “Transformers: Age of Extinction” with $245 million in 2014.

After “Fallout,” however, the signs of an August slowdown similar to what the box office saw last year are starting to show. Disney’s “Christopher Robin” has opened to $25 million from 3,602 screens, below the studio’s expectations of a $27-30 million start.Critics were fairly positive with a 68 percent Rotten Tomatoes score, while opening night audiences loved the film with an A on CinemaScore.

While higher than the $21 million made by Disney’s last August release, “Pete’s Dragon,” it’s the lowest opening for a Disney release since that film, even lower than the $33 million that “A Wrinkle In Time” earned earlier this year.

Still, that’s no problem for Disney, a studio that has already earned over $2.5 billion in domestic grosses this year.With a $30 million global start against a $70 million budget, “Christopher Robin” will look for bigger openings in the U.K. and Australia, where Pooh and the A.A. Milne books he’s based on have been popular for nearly a century. Pooh also enjoys a strong fanbase in Japan, though the film will not be released in China as the honey-loving bear is often used by opponents of the country’s government to mock President Xi Jinping.

In third is Lionsgate’s “The Spy Who Dumped Me,” which has slumped to an opening of just $12 million from 3,111 screens. With critics giving the film just a 37 percent on the Tomatometer and audiences not liking it much more with a B on CinemaScore, the Kate McKinnon/Mila Kunis comedy is looking like it won’t match the success of films like “Office Christmas Party” or “Game Night,” which opened to $16-17 million and went on to have legs at the box office.

But Fox’ “The Darkest Minds” flopped even harder this weekend, posting an opening of just $5.7 million and finishing in eighth this weekend as the YA novel genre continues to fall out of moviegoers’ favor in this post-“Hunger Games” marketplace. Produced on a $34 million budget, critics panned the film with a 19 percent Rotten Tomatoes score while audiences gave it a B on CinemaScore.

Among holdovers, “Mamma Mia! Here We Go Again” isn’t showing the endurance of its 2008 predecessor, but is still doing decently with $9.1 million in its third weekend for a domestic total of $91.3 million and a global total of $230 million. Sony’s “Hotel Transylvania 3” and “Equalizer 2” both grossed in the $8 million range this weekend, with “Equalizer” sitting just shy of $80 million domestically while “HT3” sits at $136 million domestic and $338 million worldwide. Meanwhile, “Incredibles 2,” which cross $1 billion worldwide this past week, added $5 million this weekend to push past “Zootopia” on the global chats with $1.04 billion.