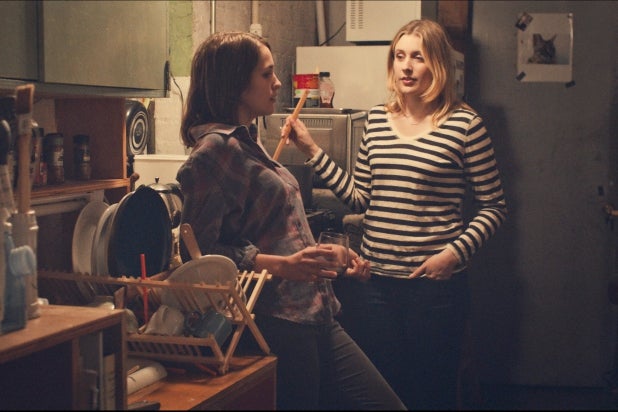 Writer-director Noah Baumbach and his current muse, Greta Gerwig, return with “Mistress America,” a wickedly sharp comedy about two women at different stages in their lives.

“Mistress” is a brainy delight on its own terms, but the film also feels like an antidote to summer disappointments like “Vacation” (here’s a comedy that lets us feel for its characters while also laughing at their foibles) and “Irrational Man” (Gerwig and Baumbach are doing Woody Allen better than Woody is these days).

Like the duo’s previous screenplay, “Frances Ha,” this is a film about an unfocused, freewheeling woman, and while other movies might castigate her flightiness or sanctify her carefree attitude, Gerwig and Baumbach admire her spirit while also acknowledging that, at a certain age, it’s time to quit being the life of the party and start getting down to brass tacks.

The woman at the center of “Mistress America” is Brooke (Gerwig), but we meet her through the eyes of college freshman Tracy (Lola Kirke), who has just moved to New York City and is desperate to make it into her university literary magazine after her first submission fails to attract attention. Tracy’s mom (Kathryn Erbe) and Brooke’s dad are set to get married over Thanksgiving, so the stepsisters-to-be meet and, after one madcap night together, Tracy finds the subject for a new short story.

Brooke, it’s clear, is the kind of person who talks a much better game than she actually lives, whether it’s her grandiose plans to open a restaurant (that would also be a hair salon and neighborhood bodega) or her ideas for books she’ll never write or TV shows she’ll never create. She nurses a grudge against her former best friend Mamie Claire (Heather Lind, “Turn”) who, Brooke claims, stole her idea for a line of T-shirts, both of her cats, and Brooke’s former boyfriend, the wealthy, dorky Dylan (Michael Chernus, “Orange Is the New Black”).

But for all of Brooke’s shortcomings, it’s Tracy who gets the harsher examination, since she’s willing to exploit Brooke’s life for a judgmental piece of fiction. She also manipulatively stringing along classmate Tony (Matthew Shear, “While We’re Young) even after he starts dating the exceedingly jealous Nicolette (Jasmine Cephas-Jones).

What makes “Mistress America” so lovely — and so of a piece with “Frances Ha,” my favorite film of 2013 — is its balance of compassion and scrutiny: Baumbach and Gerwig don’t let these characters get away with their shortcomings, but neither does the film condemn these people or present them as irredeemable.

The consistently on-point performances are aided immeasurably by the sprightly pacing (from editor Jennifer Lame, who also cut “Paper Towns,” another movie about an It Girl who’s more than she appears from outside observation); there’s a lengthy sequence in Dylan and Mamie Claire’s Connecticut manse (involving all the major players, plus a very pregnant book-club member played by Cindy Cheung) that’s a masterpiece of spinning plates and comedic awkwardness.

While “Mistress America,” for me, falls just the tiniest bit short of the revelation that was “Frances Ha,” it definitely ranks among the funniest films I’ve seen all year. (You’ll have to trust me that a line of dialogue about one exceedingly unamusing topic is so impeccably timed and delivered that it left me literally gasping for breath.)

On the heels of “While We’re Young,” Baumbach has scored the rare achievement of two brilliant comedies in one calendar year, and Gerwig cements her position as not only one of the screen’s great comic leading ladies but also one of its finest young writers.