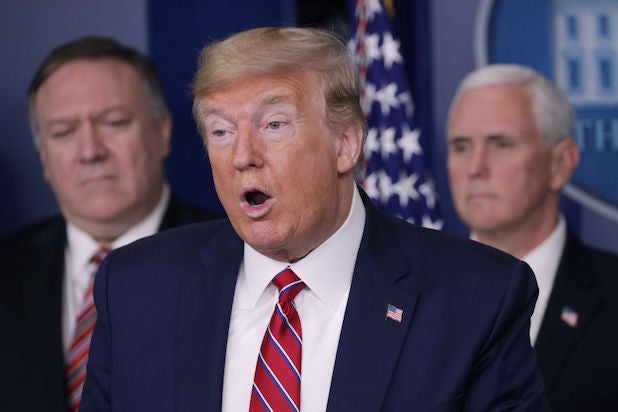 Donald Trump’s belittling rant against Michigan Gov. Gretchen Whitmer prompted an angry op-ed from “Tuesdays With Morrie” author Mitch Albom in the Detroit Free-Press, who told the president to “show some respect.”

Albom, who lives in Detroit, was responding specifically to complaints made by the president against Whitmer in a Fox News interview on Thursday, accusing her of not doing enough to combat the coronavirus pandemic in her state without mentioning her name. His comments came after Whitmer requested more federal support for Michigan medical centers in the form of additional supplies.

“The governor of Michigan, she’s not stepping up,” Trump said. “I don’t know if she knows what’s going on, but all she does is sit there and blame the federal government. She doesn’t get it done and we send her a lot.”

Albom urged the president to “stop complaining about her ‘complaining.’ Gretchen Whitmer hasn’t done anything that every Michigander doesn’t want her to do — ask the federal government for masks, ventilators, test kits and other aid to fight the COVID-19 virus that is infecting and killing us. She’s not speaking for herself. She’s speaking for the people.”

Also Read: What Gateway Pundit (and Trump) Got 'Wrong' About NY Gov Andrew Cuomo and Ventilators

And, on March 28, the president tweeted: “I love Michigan, one of the reasons we are doing such a GREAT job for them during this horrible Pandemic. Yet your Governor, Gretchen ‘Half’ Whitmer is way in over her ahead, she doesn’t have a clue. Likes blaming everyone for her own ineptitude! #MAGA”

“First of all, she has a name. Gretchen Whitmer. She is not ‘the woman’ or ‘all she does is sit there’ or ‘you know who I’m talking about’ — all phrases President Donald Trump has used besides saying the actual name of the person Michigan voters elected to govern us,” Albom wrote. “It’s ‘Gretchen Whitmer.’ Show some respect. At a time when Americans must adjust to a world without hugs, kisses or handshakes, the least a president of the United States can do is call our governor by her name.”

“You can be Whitmer’s biggest critic, but you must admit she knows what’s going on,” Albom continued. “She jumped into action early on this virus, dialing down crowd sizes, closing the schools, going after gougers, then shutting the state down altogether, long before most states took similar steps.”

Albom accused Trump of lashing out against Whitmer and other governors like Washington’s Jay Inslee out of a sense that they were not showing enough gratitude for his administration’s support and criticizing Trump’s early response to the growing pandemic, which he repeatedly downplayed before multiple U.S. states began closing businesses and ordering citizens to stay home to prevent further spread of the disease.

“Trump’s attacks on governors threaten to pull apart the country precisely when it needs to come together,” Albom wrote. “And you can trace them directly to his hurt feelings. If Trump perceives someone to be critical of him or even his policies, he uses a flamethrower in response.”

“Let’s be honest. We have come to tolerate an infantile person in a grown man’s job, a baby in a suit. […] Now is not the time to be a child, Mr. President. Now is the time to put away childish things. To be a man. You can begin by respecting a woman. Her name is Gretchen Whitmer. She is our governor. And like her or not, she represents us to you. She counts. We count. Please, at least act like you understand that.”

As of Sunday, the United States has reached over 125,000 confirmed cases of coronavirus. That is the most of any nation in the world, though the actual number of infected Americans is believed to be far greater due to the lack of testing resources. Over 2,000 Americans and over 30,000 people worldwide have died from the disease.