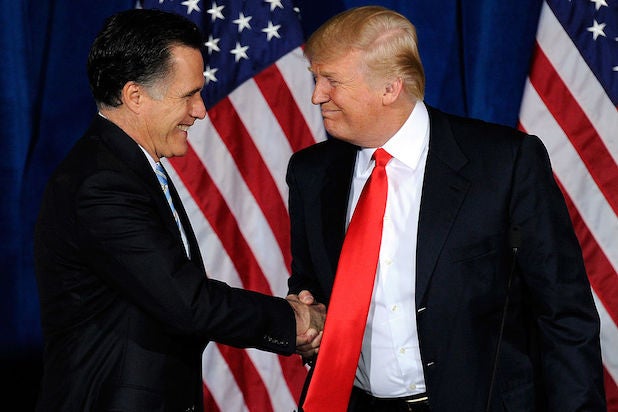 Mitt Romney once said Trump was “a phony, a fraud” and “very, very not smart” when it comes to foreign policy. Trump called Romney a “failed candidate” and “choke artist.”

Back in 2012, when Trump endorsed Romney’s campaign against President Obama, Trump and Romney had nothing but praise for each other. But as Trump dominated the 2016 Republican primaries, Romney began to speak out against him.

“But you say, wait, wait, wait, isn’t he a huge business success? Doesn’t he know what he’s talking about? No, he isn’t and no he doesn’t.”

“I’m afraid that when it comes to foreign policy he is very, very not smart.”

“Dishonesty is Donald Trump’s hallmark. He claimed that he had spoken clearly and boldly against going into Iraq.Wrong. He spoke in favor of invading Iraq. He said he saw thousands of Muslims in New Jersey celebrating 9/11. Wrong. He saw no such thing. He imagined it.”

“Think of Donald Trump’s personal qualities. The bullying, the greed, the showing off, the misogyny, the absurd third-grade theatrics.”

“There’s plenty of evidence that Mr. Trump is a con man, a fake. Mr. Trump has changed his positions not just over the years, but over the course of the campaign. And on the Ku Klux Klan, daily for three days in a row.”

“Here’s what I know: Donald Trump is a phony, a fraud. His promises are as worthless as a degree from Trump University.”

“He’s playing members of the American public for suckers: He gets a free ride to the White House, and all we get is a lousy hat.”

“His domestic policies would lead to recession. His foreign policies would make America and the world less safe. He has neither the temperament nor the judgment to be president and his personal qualities would mean that America would cease to be a shining city on a hill.”

Trump responded that day during a campaign appearance:

“Look, Mitt is a failed candidate. He failed. He failed horribly. He failed badly. … He’s a choke artist.”

“He was begging for my endorsement. I could have said, ‘Mitt drop to your knees’ and he would have dropped to his knees.”

If Trump had said 4 years ago the things he says today about the KKK, Muslims, Mexicans, disabled, I would NOT have accepted his endorsement

“When it comes to Donald Trump, there’s some of us who think he’s not the real deal, that he’s a phony. And there are others who think he is, so hey, prove it to us. Let us see the tax returns.” (See below).

“It is disqualifying for a modern-day presidential nominee to refuse to release tax returns to the voters, especially one who has not been subject to public scrutiny in either military or public service. … There is only one logical explanation for Mr. Trump’s refusal to release his returns: there is a bombshell in them. Given Mr. Trump’s equanimity with other flaws in his history, we can only assume it’s a bombshell of unusual size.”

“I don’t want to see a president of the United States saying things which change the character of the generations of Americans that are following. Presidents have an impact on the nature of our nation, and trickle-down racism, trickle-down bigotry, trickle-down misogyny, all these things are extraordinarily dangerous to the heart and character of America.”

“He’s calculated that he could get support even if he shot someone, but if he released his taxes, he’d lose support. So there’s something in those taxes that’s even worse than shooting someone on Fifth Avenue.”

“I wish everybody in the Republican Party had rejected Mr. Trump and chosen someone else.”

“Mitt Romney had his chance to beat a failed president but he choked like a dog. Now he calls me racist — but I am least racist person there is.”

Mitt Romney had his chance to beat a failed president but he choked like a dog. Now he calls me racist-but I am least racist person there is

President-elect Trump and Romney are scheduled to meet to discuss Romney becoming Trump’s secretary of state.