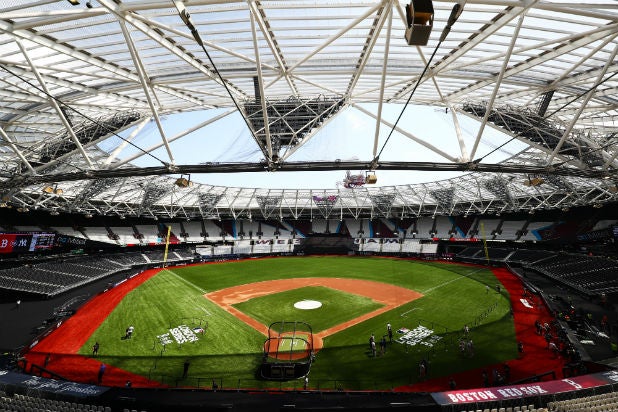 The MLB made history this weekend with the first-ever regular season games on European soil at the London Stadium in England, as reigning World Series champions Boston Red Sox took on the New York Yankees.

The most famous rivalry in baseball crossed the Atlantic to be played on the field that’s normally home to Premier League soccer team, West Ham United, for the two-game series.

A sellout crowd of 59,659 people braved sweltering weather as temperatures reached 92 degrees Fahrenheit, making Saturday the hottest day of 2019 in the England.

Fans could watch the MLB London Series live on Fox (Saturday) and ESPN (Sunday) in the U.S. or on the BBC and BT Sport in the U.K., but TheWrap was in the stands to witness the Anglo-American collaboration.

Here are 8 things you didn’t see on TV.

1. While a few Boston and New York accents could be heard in the crowd, the majority of the fans were Brits wearing their crisp new Sox or Yankees jerseys. Those who didn’t already have game gear queued for hours in long lines at merchandise stores inside the stadium (Brits love to queue) or wore any American sports garb they had, ranging from NFL jerseys to Chicago Cubs caps.

2. Brits also love to chant. Traditional soccer songs are notoriously filled with F-bombs and X-rated taunts aimed at the opposing team, but fortunately the family-friendly crowd in London stuck to more PG-versions of “Let’s go Red Sox” or “Aaaaaaaron Judge.”

3. In addition to singing the traditional “Star Spangled Banner” before every MLB game, the Capital Children’s Choir performed a flawless rendition of “God Save the Queen,” as the U.S. flag and U.K.’s Union Jack were both spread across the field. The pre-game DJ also got in on the cross-cultural theme as Manchester indie band The Charlatans shared airtime with American classics like Lynyrd Skynyrd, while Duran Duran blasted out between innings.

4. The entire concept of baseball is foreign to many British people, with some thinking of it as an unsophisticated version of cricket or like the schoolyard game of rounders. Have no fear, the Americans were here to help, as experts explained the basic rules in interviews airing on the jumbotron before first pitch and throughout the games.

5. A common criticism of baseball is often that its slow and low-scoring, but that theory was blown out by Saturday’s game, which had a combined 30 runs, making it the highest ever in a Sox-Yankees game. While the Yankees won Game 1, the Sox got off to a fast start on Sunday afternoon by scoring four rapid-fire runs in the first inning of Game 2 to keep the crowd on their feet.

6. An integral part of any live sports experience is stadium food, and the MLB London Series pulled out all the gut-busting stops along with the obligatory peanuts and Cracker Jack. The main event was the “broomstick” hot dog, costing $30, stretching 2-feet long and delivering a whopping 2,000 calories. More refined British palates could opt for a “bacon bap,” “pork scratchings pot” or Cornish Pasty. Traditional English Mr. Whippy ice cream sundaes were served in very American baseball cap signature cups, topped with a Cadbury chocolate flake. Of course, beer was free-flowing but one drinks stall got into the Wimbledon spirit a day early by selling Pimm’s paired with strawberries and cream.

7. The Boston Red Sox P.R. team definitely embraced the British theme and seemed to have a lot of fun with their post-game press notes that were distributed to media. The stats, scores and essential details were given subheads inspired by U.K. classics such as the Rolling Stones’ “Jumpin’ Jack Flash,” the Beatles’ “Yesterday” and even a shout out to bangers and mash.

8. Famous characters you never expect to see at a ball game are Winston Churchill, Freddie Mercury, the Loch Ness Monster and King Henry VIII … but they all raced each other as hilarious play on the Washington Nationals’ mascot run.