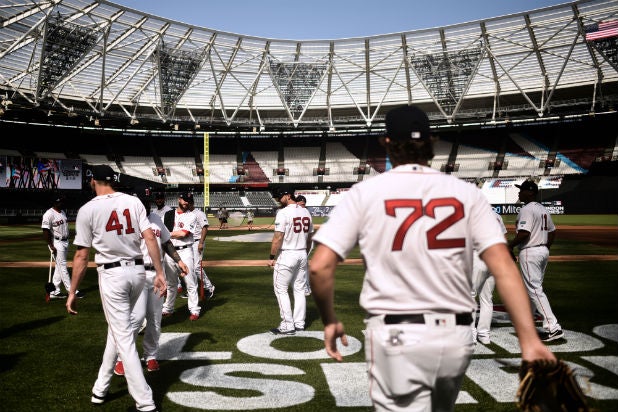 The two-game Major League Baseball series in London Stadium between between the Boston Red Sox and New York Yankees on Saturday and Sunday marked the first time regular season baseball had been played in England’s capital.

But it is not going to be the last. The MLB has already confirmed that it will be returning to London next year when the St. Louis Cardinals and Chicago Cubs will play June 13-14, 2020.

While many people have described last weekend’s Sox-Yankees inaugural U.K. trip as historic, ESPN analyst Jessica Mendoza told TheWrap that the real history will be made when the league returns.

“It’s not a one-off as Major League Baseball has committed to coming back at least one more year,” Mendoza said. “The NFL has returned multiple years and I think that is when the difference happens. It doesn’t happen if it’s only one time … it’s fun and it’s great, but until they do it consistently, that is when the impact is real,” she explained.

The 2019 MLB London series set a high bar and raised hopes for the future of baseball in the soccer-obsessed country, where the two games drew the sport’s highest attendances in 16 years as approximately 60,000 people filled London Stadium each day, according to The Guardian. An estimated 75% of the sold-out crowd was British.

“The atmosphere has been amazing, even just walking around London. I was in Green Park near Buckingham Palace on Friday and there were a bunch of guys in Yankees caps playing catch in the park,” Olympic softball gold and silver medalist Mendoza marveled. “I’ve been to London many times and have never seen anyone play catch with a baseball … and that was even more amplified when we got into the stadium.”

Tickets reportedly sold out within hours and fans who snapped them up certainly seemed to know their stuff, but not all the locals were as well-educated on the nuances of America’s pastime.

“We did an interview with a bunch of people on the streets asking them questions and they were pretty funny! We asked: ‘What do you think a foul ball is?’ ‘A ball covered in poop,’ they replied,” Mendoza laughed. “Buster [Olney] went out and interviewed people around town who didn’t have a lot of knowledge, but that was the point of the piece,” she added.

“Even Prince Harry made a joke on Saturday saying he’d have been a good bowler, which I guess is a cricket term,” Mendoza said.

Harry and his wife, Meghan Markle, gave the series a royal stamp of approval when they walked to the mound on Saturday with 10 participants in the Invictus Games, an international project started the prince started to give wounded military men and women a chance to compete.

More than 141,900 square feet of artificial turf was installed on top of the grass surface at the London Stadium — normally home to West Ham United Football Club — to create the diamond-shaped baseball field, according to Sky Sports, along with a batter’s eye, batting cages, dugouts and temporary clubhouses built for the series. Murray Cook, MLB’s senior field coordinator and consultant, described the 23-production to ESPN as building a “ballpark-in-a-box.”

While it certainly looked authentic from a fans’ point of view, there were some differences for the players. “In center field, we saw the outfielders having a hard time catching the ball because of all the white seats as the ball blends in. I think the aerodynamics of the stadium created a different feel,” Mendoza said. Also different for reasons that have been highly debated by baseball writers were the high number of runs over the weekend, with the Yankees beating the current World Series Champions by 17-13 and 12-8.

Broadcast rights in the U.S. were split between Fox, for Saturday’s game, and ESPN, which had its “Sunday Night Baseball” broadcast team of Mendoza, Matt Vasgersian, Alex Rodriguez and Olney calling Game 2.

“The biggest difference for us in the booth is that it is all open air,” Mendoza told TheWrap before Sunday’s game. “That’s exciting because once the game starts, we’re in the stands with the crowd. For the first pitch and first inning it will be really interesting to feel the game with the fans rather than being secluded in a box.”

Along with its on-air talent, ESPN had around 100 staff members in London for the fully-shared production with Fox. The sports giant has previously aired international MLB games from Cuba, Puerto Rico and Japan.