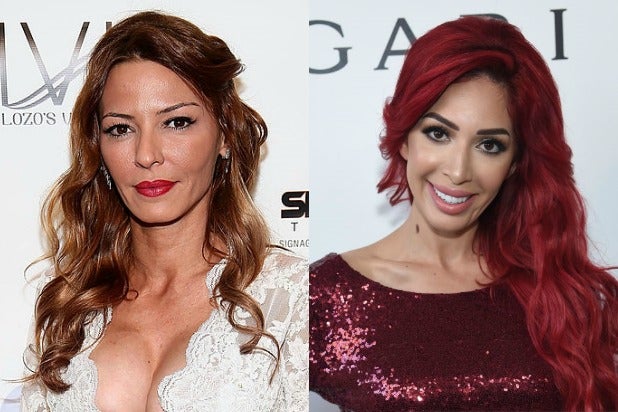 “Mob Wives” Drita D’Avanzo and Farrah Abraham duked it out in a knockdown, drag out war of (profane) words on Instagram Friday, with the former telling the latter, “I’m going to open-hand smack the f— out of you, straight up.”

The two reality stars joint-hosted the grand opening of Scores gentleman’s club in Atlantic City Thursday, and all seemed to be fine. But Abraham took to Instagram Live early the following morning, posting a video that has since been taken down in which she apparently is complaining about D’Avanzo.

“… she can’t even do the photos for the club, she can’t meet anymore, she can’t talk to anyone, then she just disappears!” said “Teen Mom” alum Abraham, according to Page Six.

D’Avanzo got wind of the video and posted one of her own. And her retaliatory threat was not veiled.

“Look, there’s a lot of drama going on today with Farrah. If you don’t know who Farrah is, Farrah was on ‘Teen Mom’ and then she became a hooker or some s—,” D’Avanzo said. “Listen, I don’t care. It’s irrelevant. I don’t care that she’s a d—less unemployed b— job. As long as you’re not my kid, it doesn’t bother me.”

D’Avanzo said what does bother her is waking up to hear Abraham is “ripping me to shreds on your IG.”

Later Friday, publicist R. Couri Hay posted a photo of himself on Instagram with Abraham and D’Avanzo. Abraham tweeted that photo with a clown face over D’Avanzo and a caption that read, “Dinner & Atlantic City was fabulous I hope the clown fixes her drug problem & her abusive relationship Girl I’m rootin for ya but have self control & don’t threaten my safety such a bad look on top of not working no wonder you don’t get paid. @PageSix”

Dinner & Atlantic City was fabulous I hope the clown fixes her drug problem & her abusive relationship Girl I’m rootin for ya but have self control & don’t threaten my safety such a bad look on top of not working no wonder you don’t get paid @PageSix pic.twitter.com/yrbgZuZu7u

In February 2016, D’Avanzo was arrested and charged with assaulting a woman in New York. “I no longer assault anybody, OK, ’cause the last time someone tried to test me, they ended up putting me in jail,” she said in her recent post.