Moby has canceled all of his public appearances “for the foreseeable future,” according to his website. The musician has faced backlash after writing in his new book that he used to date Natalie Portman. The actress has denied any such relationship, referring to Moby at the time he references as “a much older man being creepy with me.”

“Moby is canceling all upcoming public appearances for the foreseeable future,” the frontpage of Moby.com now reads. “We apologize for any inconvenience this may cause. All tickets will be refunded at the point of purchase, and Moby is happy to provide signed bookplates to everyone who bought tickets to these events.”

In Moby’s memoir “Then It Fell Apart,” he writes that he dated Portman when she was 20 and he was 33. Portman has disputed that, saying, “I was surprised to hear that he characterized the very short time that I knew him as dating because my recollection is a much older man being creepy with me when I just had graduated high school.” The actress also noted that she was 18 at the time.

The Guardian quoted a passage of Moby’s book in which he said he met Portman at Harvard, where she went to school, and that they could sometimes be found there “kissing under the centuries-old oak trees.”

“I was a fan and went to one of his shows when I had just graduated,” Portman said. “When we met after the show, he said, ‘Let’s be friends.’ He was on tour and I was working, shooting a film, so we only hung out a handful of times before I realized that this was an older man who was interested in me in a way that felt inappropriate.”

Also Read: Moby Apologizes to Natalie Portman Over Dating Debate: I Should've Been Respectful When We Met

I’m going to go away for awhile.
But before I do I want to apologize again, and to say clearly that all of this has been my own fault.
I am the one who released the book without showing it to the people I wrote about. I’m the one who posted defensively and arrogantly. I’m the one who behaved inconsiderately and disrespectfully, both in 2019 and in 1999.
There is obviously no one else to blame but me.
Thank you, and I’m sorry.
Moby

He previously shared this apology on the same social media platform:

As some time has passed I’ve realized that many of the criticisms leveled at me regarding my inclusion of Natalie in Then It Fell Apart are very valid.
I also fully recognize that it was truly inconsiderate of me to not let her know about her inclusion in the book beforehand, and equally inconsiderate for me to not fully respect her reaction.
I have a lot of admiration for Natalie, for her intelligence, creativity, and animal rights activism, and I hate that I might have caused her and her family distress.
I tried to treat everyone I included in Then It Fell Apart with dignity and respect, but nonetheless it was truly inconsiderate for me to not let them know before the book was released.
So for that I apologize, to Natalie, as well as the other people I wrote about in Then It Fell Apart without telling them beforehand.
Also I accept that given the dynamic of our almost 14 year age difference I absolutely should’ve acted more responsibly and respectfully when Natalie and I first met almost 20 years ago.

This was Moby’s book tour schedule: 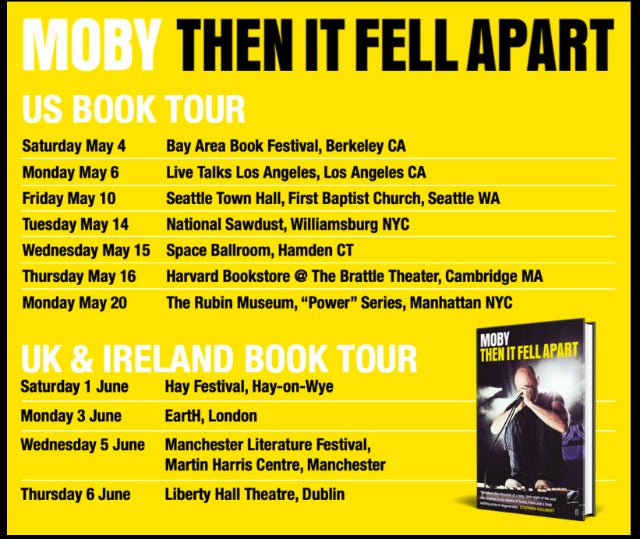