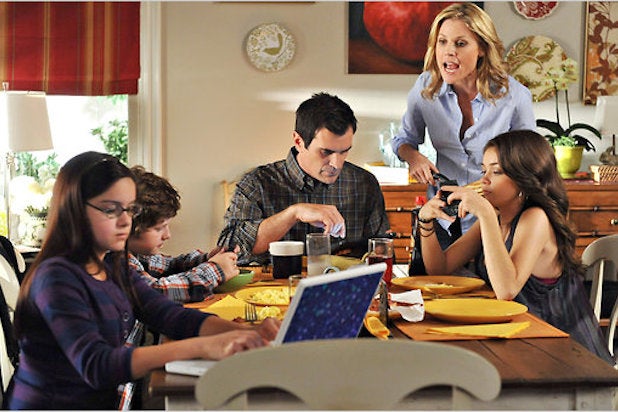 ABC comedy “Modern Family” is getting the full social media treatment in a special upcoming episode.

“I realized that on that screen you could tell so much about my life,” Levitan said during a special screening of the episode, which TheWrap attended. “I thought wouldn’t it be cool to do a whole episode [like that]?”

Minutes before Claire is about to get on a flight, she realizes her daughter, Haley (Sarah Hyland), is missing in action. Things get dicey when Claire suspects Hayley may have eloped during a trip to Las Vegas, sending the entire family into panic mode.

Viewers will get to see the storyline unfold entirely on Claire’s computer as she FaceTimes different members of the Pritchett clan in a frantic dash to locate her party-loving daughter.

Levitan says he was convinced to try out the social media theme after his daughter sent him a link to short film called “Noah,” which won TheWrap’s Third Annual ShortList Film Fest in August.

Created by Canadian film students Walter Woodman and Patrick Cederberg, the 17-minute movie plays out entirely on a teenager’s computer screen and follows its eponymous protagonist as his relationship takes a rapid turn for the worse.

“To me that was proof of concept,” said Levitan, “that you can sustain people’s interest for a long time and you can follow complicated things.”

Levitan and his team then came up with a storyline that would compliment the format.

“How are we going to get everyone on there?” Levitan asked. “What’s the reason why it has to be on the screen? Why doesn’t [Claire] have a phone? Where is she?”

The writers eventually decided to place Claire at the airport, minutes before boarding a flight, giving the episode a sense of urgency as well as comedic opportunities.

While talking to her family, Claire can be seen checking out different websites, news articles and emails, all visible to viewers watching at home.

“This is how families are communicating today,” Levitan said. “I see it in my family all the time.”

The episode was shot entirely on iPhone 6s, iPads and MacBook Pros.

“We thought it would be silly to shoot amazing footage and then dumb it down,” said Levitan. “It’s going to look amazingly gorgeous but yet real.”

Levitan and his team had speed up their shooting schedule to give editors enough time to recreate Facebook and Apple’s iconic graphics – a task that proved more difficult than they originally anticipated.

“We had [edit] renders that would take up to an hour,” said Levitan. “We were really pushing it.”

Everything from articles and emails were all meticulously written from scratch, all in an effort to give it an authentic feel.

“You can stop and freeze and read everything,” said Levitan. “Every window, every bar, every line was put on by us.”

Even Alex’s (Ariel Winter) college essay, which she sends to Claire for review, was written to look 100 percent real.

“It was my satire version of those essays,” said writer Megan Ganz who wrote Alex’s admission essay. “I was trying to say the least amount of information in the most amount of words.”

Producers even had the show’s crew write comments on Claire’s Facebook page.

“We were able to insert a lot of the jokes in post production,” said Ganz. “It was a different way of doing things. Usually we have to have everything written before we begin shooting.”

But, viewers may have to hit that rewind button to get some of the more nuanced jokes.

At one point, Claire goes down a rabbit hole, convinced that Hayle eloped because she got pregnant. A made-up Lifetime movie called “Not Without my Daughter’s Daughter” (a nod to the 1991 film, ‘Not Without My Daughter,” starring Sally Fields), appears on the screen during one of her searches.

“We purchased all the emails you see on the show,” said Ganz. “So, if you email any of those addresses somebody on the show will get them.”

Whether or not this new format makes another cameo in future storylines will depend on how well this particular episode does.

“We’ve always embraced new technology on the show,” said Levitan. “It’s a passion of mine. I’m super geeky with all this stuff.”