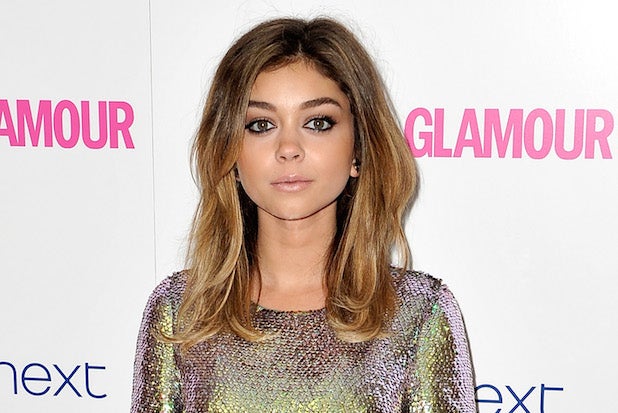 If you don’t see Sarah Hyland online for a bit, you have the haters to blame.

“Modern Family” star Hyland announced that she is taking a break from online activity Tuesday night, citing the “horrible negative ignorant words” she has encountered.

In a tweet, Hyland said that the words “have broken me.”

“You guys finally did it. Your horrible negative ignorant words have broken me,” Hyland wrote. “Happy? Staying offline for a while.”

The actress did add, however, that “I have a special announcement and video releasing on Wednesday I believe. So. There’s that.”

Hyland punctuated her announcement with an image of a hand flashing the peace sign.

Hyland’s online time-out comes after a very rough few days for the actress. On Sunday, Hyland announced that her cousin, Trevor Canaday, had died following a traffic collision.

Hyland wrote, “Yesterday my 14 year old cousin was killed by a drunk driver named Jeffrey Eggerling. My Uncle is in the hospital awaiting more surgeries. PLEASE keep your prayers with my family during this horrific time. And please DONATE.”

The Omaha Police Department confirmed Canaday’s death following a traffic collision Saturday, noting that the driver of the other car, identified as Jeffrey Eggeling, had been booked on two counts of DUI causing serious bodily injury and leaving the scene of a personal injury crash.

On Monday, Hyland vented over the “negative thoughts or opinions” that she had seen, adding, “How dare you attack when a beautiful life has been lost.”

“I’d like to ask those who have negative thoughts or opinions about the tragedy that happened to my family, to keep them to themselves,” Hyland tweeted. “You don’t know all the details. And how dare you attack when a beautiful life has been lost.”

Though Hyland did not specify the “negative thoughts or opinions” that she took issue within Monday’s tweet, the actress had been criticized on social media for asking people to donate to a GoFundMe campaign seeking donations for Canaday’s funeral expenses, as well as for medical expenses relating to the collision.

A commenter on Hyland’s Instagram account wrote, “Says alot about the kind of person you are that you would ask your followers to donate for your cousins [sic] funeral, when you sit in a position of great privilege and have more money then [sic] most of would ever hope to see in our lifetimes.”

Another commenter added that “celebrities are notorious for asking others to donate to friends and families [sic] gofundme pages. Why would they bother covering the costs when they can keep expanding their wallets while everyone else pays.”

“You only have yourself to blame for this backlash, unless there’s some massive detail we’re all missing,” read one reply to Hyland’s tweet. “Asking complete strangers to contribute to the funeral expenses of your own family member which you could easily pay for yourself is low-class and unconscionable.”

Hyland did receive support as well in the comments section, with another reply reading, “Take the time to focus on your family and heal. I am so sorry for your loss, it’s awful that people are being so cruel. I hope they never have to experience the hurt of the tragic loss of a loved one. Sending love and peace.”

You guys finally did it. Your horrible negative ignorant words have broken me. Happy? Staying offline for a while. I have a special announcement and video releasing on Wednesday I believe. So. There’s that. ✌????