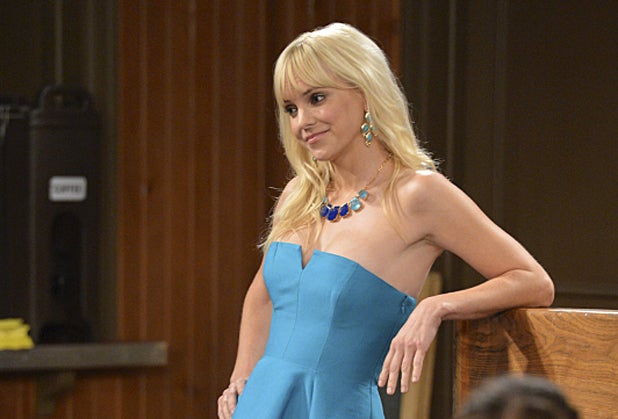 It’s quite possible Anna Faris is the nicest person in Hollywood.

The “Mom” star has had an incredible year. Her show has consistently delivered in the ratings department, becoming network TV’s fastest-growing program. The fact that her husband, actor Chris Pratt, has starred in one of the year’s most anticipated movies, “Jurassic World,” is just icing on the cake.

Faris spoke to TheWrap about life in Hollywood, her favorite shows to binge-watch and how to celebrate your husband’s movie breaking into the billion-dollar club.

What was the toughest thing you had to do this season?
Oh man! Not to get too emotional about it, but I think it was when I forced my daughter to visit my ex’s grave, and I tell her the story of her father who was abusive to me. It was incredibly rewarding as an actress. I don’t get to do a lot of stuff like that. But it was also really challenging in a great way.

What was the most fun thing you got to do this season?
I love it when my character lies, especially when I get to lie to Allison Janney. My character has the burden of being the mom to everybody in her life. So it’s really fun when I get to be naughty. The season opener when I lie to my mom about my gambling. It’s really fun to be liar. It’s delicious.

Let’s assume that somebody has never seen your show. What would you say to persuade them to watch it?
The title sounds innocuous and safe, but I don’t think there’s anything safe about our show. Also, the brilliant Allison Janney.

Who else on your show really deserves an Emmy, and why?
Chuck Lorre is my answer. He is so brilliant. He’s truly a genius. I’ve never worked with somebody whose instincts are so incredible. He sees the macro and the micro. It’s really thrilling to watch. If he doesn’t get an Emmy in his lifetime, I think the whole thing is just … well I’m not going to say that. Chuck Lorre deserves a gazillion Emmys. And Mimi Kennedy (Marjorie) too.

Are you a binge-watcher, or a once-a-weeker? What was the last show you binged?
I love to binge-watch. I have a child and we travel a lot, so that’s usually how I do much of my watching. I was crazy about “Last Man on Earth.” I binge-watched pretty much the whole season. I just got a total kick out of it. I’m also loving “UnREAL.” It’s a new Lifetime show with Constance Zimmer and Shiri Appleby. It’s about this woman’s life experience being an associate producer of “The Bachelor” and the dark underworld of faking these reality shows. It’s unlike anything you’d expect on Lifetime. Everyone is sleeping with each other and they manipulate contestants, and it’s smart enough to not feel like a guilty pleasure.

If you could add any new category to the Emmys, serious or silly, what would it be?
Oh my god, that’s a really good one. It would be nice to have a cable/network distinction. Also, I would be of the mindset to eliminate gender differences. Doesn’t it seem a bit arbitrary? Why are there gender differences in acting categories? Why not just have “Best Performance in a Tuxedo?” But I’m a good sport and frankly, between you and me, I wouldn’t mind one of those gold beauties.

Both you and your husband have had quite a year. What’s the secret to having a successful marriage in Hollywood?
It’s so wild. We just keep looking at each other, and we’re like, Are they going to figure it out that we’re just a couple of kids from Washington State? We just try to find the humor in it, and we feel incredibly fortunate that we get to do a job that we love. We talk about some day getting a house up in Washington and building an amphitheater so we can force our child and maybe the neighbors to perform plays with us.

How do you celebrate your husband’s movie joining the billion-dollar club?
Isn’t that crazy? And it was his birthday on Sunday and Father’s Day. He’s on this crazy diet, so we can’t go out to eat. But you know what we did? Puzzles, we drank a little wine and I got him a little chocolate cake. Poor thing I don’t think he’d had anything sweet in a little while.