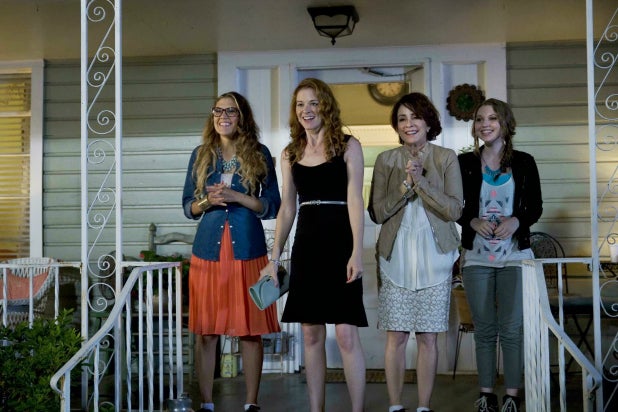 Christian cinema refuses to stand still. Though mainstream audiences may associate the genre with Gospel recreations like Mel Gibson‘s “The Passion of the Christ” and producer Mark Burnett‘s “Son of God,” the faith-friendly industry continues to diversify. Last year, it produced a (dreadful) quirky rom-com called “A Strange Brand of Happy,” and now it tries its hand at the underserved women’s comedy genre with “Moms’ Night Out.”

Directed by brothers Andrew and Jon Erwin, this ostensible femme-powerment film is strangely unsympathetic, even demeaning, to its target audience. Rather than pandering to moms, this unfunny, unabashedly anti-feminist comedy consistently points out how wrong or unnecessary or ungrateful they are. Debuting two days before Mother’s Day, “Moms’ Night Out” has only one message for its harried, overworked, women-on-the-verge-of-a-nervous-breakdown characters (and, by extension, its audience): Jesus loves you, so get over it.

Star Sarah Drew (“Grey’s Anatomy”), a real revelation, gets a few early scenes to demonstrate her comic genius before screenwriters Jon Erwin and Andrea Gyertson Nasfell get bored with her character and leave her to pout for a good half-hour. Jittery as a fly’s wings, Drew’s Allyson is a hilarious mess, prey to her trio of willful brats and increasingly frustrated with her stay-at-home situation.

In a different milieu, Allyson might pick up a trade and find a happy ending in “having it all.” But “Moms’ Night Out” takes place in a pre-Betty Friedan world (one where “Gangnam Style” is still cool), so her greatest ambition is to be a mommy blogger. (With the exception of Allyson’s sister-in-law Bridgette (Abbie Cobb), none of the women here appear to have jobs.)

In keeping with her pattern of dreaming small, the redheaded hausfrau wants just one thing: a guilt-free evening at the ridiculously named Chez Magique with glittery strappy sandals and the company of other women.

When Allyson, her BFF hipster-mom Izzy (Logan White) and the enviably put-together pastor’s wife Sondra (Patricia Heaton) are ejected from a too-chic eatery (in a pitch-perfect satire of restauranteur pretension that refers to ambiance as “aura” and its staff as “visionaries”), they run into single-mom Bridgette, whose baby has gone missing. (That’s what happens when you abandon your children for just one night, ladies!)

The quartet ditch their original plans to search for the lost infant — revealed early on to be safe in the care of kind strangers — while their husbands and one of their bachelor friends end up in the hospital taking care of the little ones.

Even before Allyson and her friends are repeatedly cast as squawking chickens, the women’s storyline is overshadowed in comic potential by the “three men, four toddlers and a parakeet” B-plot. Thus the scenes with the female foursome feel increasingly irrelevant in the movie about them. Later in the film, it turns out that Bridgette’s baby would have been found even if the women had done absolutely nothing.

Disappointingly, Drew is increasingly sidelined by the much louder, flashier characters around her. Heaton virtually saves the second half of the movie with her droll warmth, and she gets one killer line about Donny Osmond’s sagging face.

To add insult to inattention, the women are so feebly defined they don’t even fall into broad types like the “Sex and the City” quartet. That foursome, even when their collective portrait fell into caricature, could at least play off one another; the relationships between the moms are so negligible that Allyson eventually receives most of her most important affirmations and life lessons from men.

Most troublingly, a passing gag affirms the religious duty of women to obey their husbands. Trying to convince her friends that they should keep the party going, Allyson pleads her case by noting it would please her man. “I am listening to my husband, Sondra. It’s Biblical, right?” she asks. “It is Biblical,” replies the pastor’s wife. The scene is played jokingly, but at no other point do any of the characters suggest marital equality.

Allison’s lack of a profession consigns the character into Eisenhower-esque irrelevance, but it’s the movie’s failure to acknowledge its problematic gender dynamics that makes it wholly unsatisfying. This isn’t just because I happen to disagree with the movie’s politics; it’s that “Moms’ Night Out” never takes the difficulties of motherhood seriously.

Allyson would be greatly helped, for example, if she could share her housework duties with her husband Sean (Sean Astin), but the profoundly asymmetrical nature of their relationship is never addressed. Superficially supportive but a pig to his bones, Sean is cast in beatific light by the movie, even though he selfishly spends every Saturday night playing first-person shooters with his bud Kevin (Kevin Dowd) while leaving his wife alone (again) to take care of their kids.

The Erwins’ desire for an uncomplicated resolution forces the film to transform Allyson’s three little monsters into cherubs so that she can better appreciate them. It’s an insulting diminishment of the complex struggles of motherhood, a way of pulling the carpet out from under moms who thought they finally had a movie on their side.

If you love your mother, get her some flowers this Mother’s Day and spare her the affront of watching “Moms’ Night Out.”