The impact of Charlie Sheen’s crises is spreading beyond just “Two and a Half Men,” with the show’s previously white-hot counterpart, “The Big Bang Theory,” experiencing its lowest ratings of the year without the benefit of its lead-in having a fresh episode.

Meanwhile, ABC’s “Dancing With the Stars” continued to struggle in the post-Kate era, also logging its lowest performance of the season. 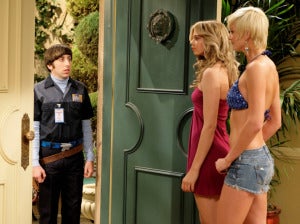 NO CHARGE FROM CHARLES: Fresh episodes of “Two and a Half Men” are in short supply, with star Sheen slowing production several months ago while in rehab, and now threatening to quit. On Monday, “The Big Bang Theory” moved its original run up half an hour to 9 p.m. (with a repeat running at 9:30), and dropped 12 percent to a 4.5 rating/12 share in adults 18-49, its lowest performance of the year in the key demo.

11 A.M.-12 P.M. WAS THEIR FINEST HOUR: Fox once again won the Monday-night adult-demo race, thanks largely to the best performance of its outgoing “24” in the last three months, with the show drawing a 2.9/8 in adults 18-49 and 9.1 million viewers.

IT JUST MAY BE A LUNATIC YOU’RE LOOKING FOR: ABC’s “Dancing With the Stars” dropped another 9 percent to a 4.0/11 in 18-49s, its lowest total of the season. Since Kate Gosselin exited two weeks ago, the show is down a full 17 percent. Still, averaging 19.4 million viewers, “Dancing” led ABC to a win in total audience for the night.