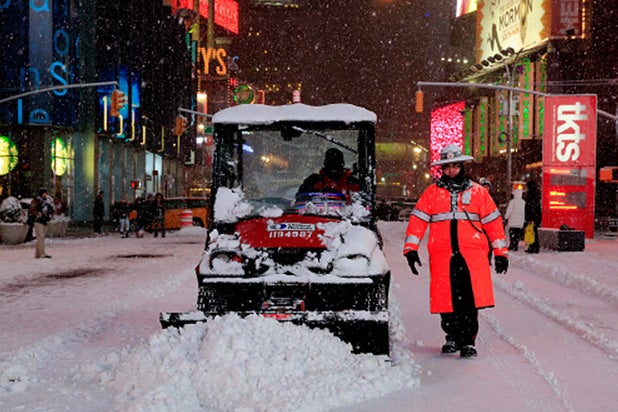 A snow plow is driven through Times Square (Getty Images)

As a crippling winter storm barreled into the Northeast Monday, millions of people braced for the worst including members of the entertainment industry.

The Academy of Country Music Awards announced its nominations for the 50th ACM Awards would be postponed “due to unforeseen weather circumstances on the East Coast,” the academy said in a statement. The group had planned to make the announcements Tuesday but will now release a list of nominees later this week.

Broadway also prepared for the blizzard. The Broadway League announced theaters would go dark Monday “as a result of the travel restrictions put in place by government.” There was no immediate word on whether The Great White Way would reopen Tuesday or stay closed until conditions improve.

Comedian Louis CK, who recently added a record breaking fourth show at Madison Square Garden for Tuesday, will have to break the record another time after postponing the show.

The cable news networks provided extensive coverage as the storm closed in, and “Today” weatherman planned to bring back his patented “Rokerthon” by hosting continuous blizzard coverage on NBCnews.com.

Airlines reacted by cancelling more than 7,000 flights through Wednesday. Nearly every big carrier announced plans to waive change fees for customers scheduled to fly into airports in the storm’s path.

Travel bans were also put in place in the half-dozen states affected by the weather, including New Jersey.

“We want to get individuals home and off the roads as soon as possible,” the state’s Gov. Chris Christie said during a news conference. “This is a different kind of storm than we’ve had before, and it’s going to affect our state in different ways.”

The hardest hit areas, from New York City to Boston, could get a total of more than two feet of snow.

Lia Haberman contributed to this report.