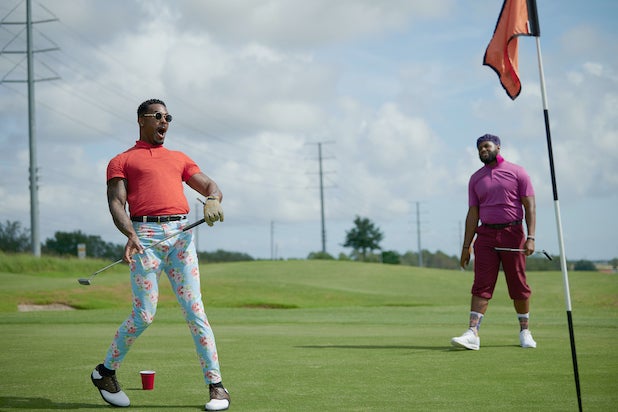 These days, it’s hard to fill three hours of (mostly) live programming every week. WWE’s “Raw” has turned to its rookie tag team champions, the Street Profits, led by the charismatic Montez Ford, to keep audiences engaged for 180 minutes each Monday.

While he and pro-wrestling partner Angelo Dawkins continue to dish out L’s in the ring, they’re also being used these days in comedic vignettes with rival tag team The Viking Raiders. To date, the two squads have competed outside the squared circle in basketball and golf. Tonight, they’ll head to the bowling alley.

TheWrap chatted with Ford (‘Tez is pictured above, left) last week, before he traded in his kicks for gross rental shoes. Read a portion of our Q&A below.

TheWrap: Do I  *want* the smoke?
Montez Ford: Of course you do, man. So the thing about wanting the smoke is it’s a way of life. It’s a terminology that is, like, pretty much when I start my day, it’s a brand-new day. I’m blessed that it’s a brand-new day that I haven’t seen before. And we want the smoke is pretty much asking, whatever happens that day, whether you got to pay a bill, whether you got to go to work, whether you got a really hard CrossFit workout, whether it’s a deadline you gotta meet, whether it’s a board you have to go on, or a competition, or anything you have to do in which you have to excel, we want to smoke it like, alright just bring it. It’s another way of saying bring whatever has coming to me. You know?

TW: What do you bowl?
MF: On a good day, maybe a 110, maybe a 120, if I’m being generous… I was looking at the score sheets up there and they have people up there getting 300s, bowling 237s, bowling 210s. And I’m like, hold up, wait a minute, you mean to tell me I’m below the damn average? So going into bowling is going to be one of them things where I’m going to have to get my wrist extremely taped up, make sure it’s suitably placed so I can throw it straight down the aisle. But bowling is tricky though, too. Bowling is one of those sports where I feel like you have no mistake, from taking the ball and throwing it down the lane, it’s like really no mistakes. Because if your wrist is off one bit, then the ball shifts and it’s a gutter ball and that’s it. So we have no room for error upcoming this week when it comes to bowling.