The first teaser for “Moonfall” established the already wild premise that the moon will be knocked from its gravitational orbit and be sent hurtling toward Earth, threatening to end life as we know it.

And if you thought things couldn’t get crazier than that, the first full trailer for the film has Donald Sutherland revealing that the reason behind that catastrophe is a dark, untold government conspiracy.

“In school you were taught that Apollo 11 lost contact with the world for two minutes. Not true,” Sutherland says in the trailer. “They found something on that day that they kept hidden for 50 years. And now, it’s too late to stop.” 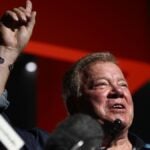 “Moonfall,” the latest disaster film from director Roland Emmerich, shows the fallout of that conspiracy, as astronauts are now racing to rescue humanity by taking one last-ditch mission into space, piloting a rocket that actually takes them “inside” the moon itself and revealing that our moon isn’t at all what we think it is. In one image for the film, a conspiracy theorist and scientist played by “Game of Thrones” alum John Bradley holds a lecture suspecting that our moon, which has some unusual qualities compared to other moons in the solar system that help it to allow life on Earth, might actually be a “Megastructure” — whatever that is.

“Moonfall” stars Halle Berry, Patrick Wilson and John Bradley, along with Michael Peña, Charlie Plummer, Kelly Yu, Eme Ikwuakor, Carolina Bartczak and Donald Sutherland. It’s also Emmerich’s follow-up to his war epic “Midway,” which was produced independently despite its enormous budget, and was a modest box office hit. “Moonfall” is being produced and financed similarly, but will be released by Lionsgate in theaters on Feb. 4, 2022.

Check out the bonkers new trailer for “Moonfall” here and above.