The daring movie that will be on people’s lips in short order, “Moonlight,” screened to a rapturous reception at the Toronto Film Festival on Saturday night followed by an emotional Q&A with a tearful cast.

Directed by Barry Jenkins, “Moonlight” ventures bravely into the treacherous world of drug dealing, crack addiction, love, poverty, family and sexual identity in Miami in the 1990s. Using three actors to play the main character, Chiron (pronounced Shy-ron), it follows a little boy who is so shy and alone that he barely notices his own conflicted sexuality in a community where being gay is an invitation to be targeted.

“The origins come from a highly biographical place,” Tarell McRaney, the playwright on whose work the film is based, said at the emotional Q&A after the screening at the Winter Garden. He recounted how a drug dealer in his neighborhood taught him how to ride a bike. “All my life … there was a patchwork of generosity from unlikely people,” he said, adding as he broke into tears, “I miss that drug dealer dearly. To sit with him for 45 minutes [on screen] is a gift.”

That unexpected reaction rippled through the rest of the cast, as one after another they recounted their personal connection to the story. Mahershala Ali, who plays the drug dealer who helps Chiron, also lost his composure as he described his character saying: “He recognized early on that the young man needs him.” 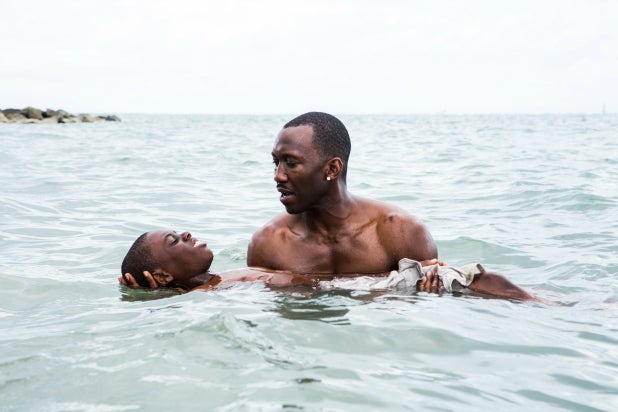 Singer Janelle Monae, who plays a kind-hearted woman named Teresa who takes in Chiron, said that in Kansas where she grew up, she saw all the same stories of addiction. “My cousins sold drugs. And Teresa is the role I played to my cousins.”

Naomie Harris plays the drug-addicted mother. The British actress said she’d sworn to never play a crack addict, but changed her mind. “I had real issues with taking on this character,” she said. “I always said I’d only portray positive images of black women. I drew the line at crack addict. But then I read the script and I was moved. Barry talked me round.” She realized, she said, that she had “so much judgement of a crack addict. But everyone deserves compassion, understanding.”

Jenkins said the film mirrors his own life, not only that of McRaney, who grew up in the same neighborhood — both with mothers who struggled with drug addiction. “The movie is like a fever dream … I wanted to immerse you guys in the story … I wanted you guys to wallow in the shit of what I grew up in,” he said.

Already gathering significant critical praise since debuting at Telluride, the film turns many conventions on their heads: A drug dealer turns out to be a paragon of compassion. A mother is in the thrall of crack. And a painfully shy boy — growing into an angry man — has feelings for a classmate.

A24 will release “Moonlight” in October.