Leslie Moonves is definitely not having a case of the Mondays.

"This is pretty terrific," the CBS chief executive officer told TheWrap this afternoon. He’s referring, of course, to the record-breaking numbers of Sunday’s Super Bowl and the post-game performance of new reality series "Undercover Boss."

Moonves, who was at Sunday’s game in Miami, said viewers responded to the emotional backstory of Super Bowl XLIV.

"This was a special Super Bowl," Moonves said, noting the inclusion of the New Orleans Saints. "I’ve been to many Super Bowls, and I’ve never seen the field like it was after the game. It was sort of like a national triumph…after Katrina. It became bigger than the game." 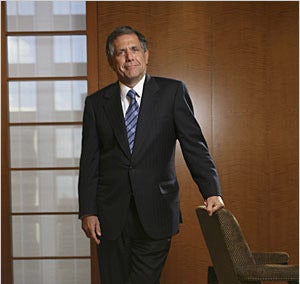 The resulting powerhouse ratings show that the "model is still working," despite rivals who’ve insisted broadcast is broken. Moonves never misses an opportunity to play cheerleader for network TV, and Monday he had plenty of reason to shout.

"There’s nothing like broadcasting. It’s the big tent, and people are still looking for those communal events to share," he said.

The CBS chief also noted the double-digit gains for last month’s Grammy Awards, saying that broadcast’s stellar performance had him thinking the Big Game would be particularly Big this year.

One possible downside to the great football numbers could become evident in coming years, when it comes time for the networks to renegotiate their license fee deals with the NFL. Some industry analysts have talked openly about sports leagues needing to get real about rights costs in an era of diminished ad revenue.

But Moonves doesn’t see any problems, at least not with the NFL.

"The NFL has always been fair," he said. "We just did a two-year extensions where everybody felt (the financials were equitable). These ratings are a good thing for their brand and a good thing for our brand."

Another big boost for CBS Corp. came via the tons of exposure the company got for its various units — mostly CBS Television, but also CBS Films. In addition to the much buzzed-about Letterman-Leno-Oprah ad, CBS impressed with funny spots for "NCIS" and "How I Met Your Mother."

"Ron Scalera and George Schweitzer did a great job," Moonves said, adding that the network had "a great mix" of spots in the game.

As for the Letterman spot, Moonves confirmed that he signed off on it in advance.

"I loved it. I thought it was brilliant," he said.