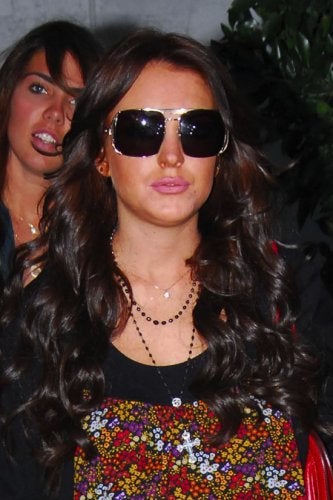 Thursday was not alleged Burglar Bunch member Courtney Leigh Ames’ day in court. Not only did she receive extra charges for receiving stolen property, but one of those charges stemmed from her wearing said property to court last month — a necklace reportedly belonging to Lindsay Lohan.

The District Attorney’s office announced Thursday morning that the additional charges had been filed against  Ames and Diana Tamayo, both 19.

They are part of the group of mostly teenage suspects accused of robbing L.A. celebrities. Ames and Tamayo were hit with more counts of receiving stolen property, according to an announcement from the D.A.’s press office.

Not since the Manson Girls were marched to and from trial in the old Hall of Justice have downtown court watchers scrutinized young women so closely as they have female members of the so-called Burglar Bunch.

The girl-gazing apparently has paid off for the D.A., who claims that Ames (pictured, foreground, with necklace) was spotted wearing Lohan’s necklace to a Dec. 2 court hearing.

The other charge against Ames, according to Deputy D.A. Sarika Kapoor, is possessing a leather jacket allegedly belonging to Paris Hilton.

Tamayo’s extra count stems from her alleged possession of an undisclosed item belong to actress Rachel Bilson. Other celebs whose bling, threads and swag were allegedly ripped off by six Bunch members between Dec. 2008 and Nov. 2009 include Audrina Patridge, Ashley Tisdale, Brian Austin Green, Megan Fox and Orlando Bloom.