The Academy has added 14 more names to the list of Oscar presenters – but rather than issuing a press release announcing the new additions, they passed out a list to press on hand at the Kodak Theater, and then put the names on the Oscar website without fanfare. 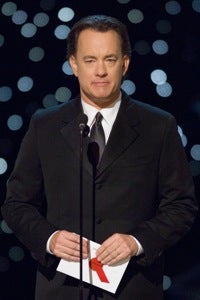 The newly announced participants include Tom Hanks (left), who told David Letterman Thursday night that he’d be appearing on the Oscar show "presenting one of the office Oscar-pool killer categories," and Spanish director Pedro Almodovar, who producer Bill Mechanic months ago named as a co-presenter (with Quentin Tarantino) of the Foreign-Language Oscar.

That brings the total of announced presenters to 46, which is about normal for an Oscar show. Without jeopardizing any Oscar secrets, though, I will say this: