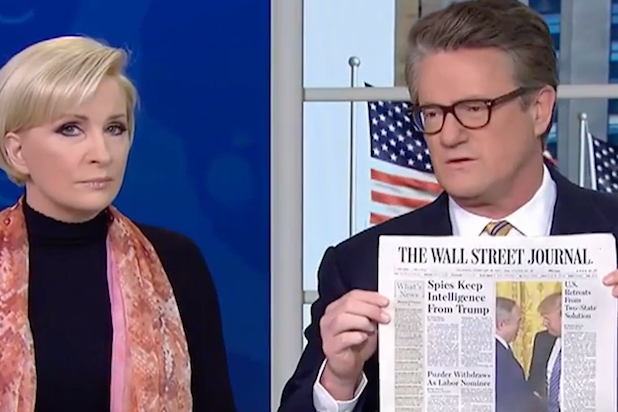 On Tuesday’s edition of Fox’s “Outnumbered,” the panel mocked “Morning Joe” co-host Mika Brzezinski’s for emotionally speaking out against actions taken by President Trump, calling her a “commentator,” not a “journalist.”

Brzezinski went on to describe “Outnumbered” as a program where “all these people with long legs and short skirts talk about how people feel about the news.”

Scarborough continued: “They had like 30 women or something and like one guy in the middle and its called ‘Outnumbered.’ Yesterday it was poor Eric Bolling and he was wonderful.”

It should be noted that it’s actually four women and one man on “Outnumbered” — and they presumably refered to Bolling as “wonderful” because he admitted to watching “Morning Joe” on a regular basis during Tuesday’s episode.

“They spend a segment talking about Mika… Mika was very upset a couple of days ago and as she was signing off… said that she was crying. She wasn’t crying. I know the emotions of Mika, so do viewers. She wasn’t crying, she was pissed off,” Scarborough said. “Seriously though, people said she was crying and tearing up because she was upset.”

“Outnumbered” wasn’t the only Fox News program to mock Brzezinski on Tuesday: Sean Hannity also tore into her after playing a clip of her bashing Trump.

Brzezinski has fought back against sexism in the past, recently tweeting to a publication that accused her of being tearful on air: “Tearfully? Really? Review the tape. All eyes on that set were dry. Is this how you marginalize women who speak up? Interesting.”