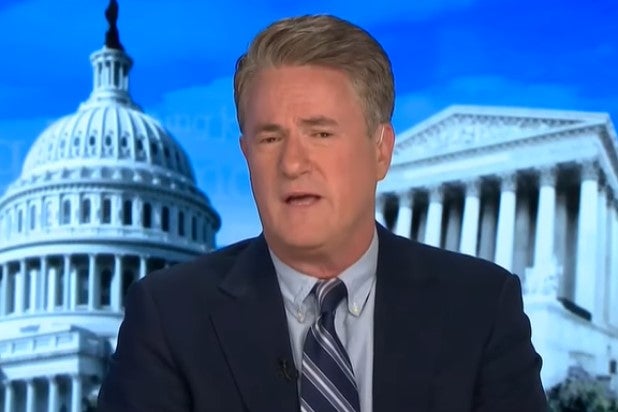 “Do you think we’re as stupid as you?” the MSNBC hosted asked after McCarthy said in a speech on the House floor that he had “a long list” of Democrats to be penalized “if people are held to what they said prior to even being in this House.”

“Give us the names … or keep your mouth shut,” Scarborough said. “We’re not that stupid.”

Joseph McCarthy, no relation to Kevin McCarthy, was a U.S. senator who stoked Cold War fears in the 1950s by claiming he had a list of Communists who had infiltrated the upper echelons of the U.S. government.

“Oh, wait a second, you know what? You don’t,” Scarborough continued. “You’re lying. You’re lying again. But, Kevin, this is just what you do. You don’t have have a list of anybody that has said anything remotely resembling what this QAnon Republican lady has said; talking about Jewish space lasers burning forests in California. Kevin, you know she actually supported the assassination of your counterpart on the Democratic side, Nancy Pelosi.”

Scarborough continued: “Because I would love for you, go on the House floor today, Kevin, and give us the name of the Democrat who, before they were (in Congress), called for your assassination, called for a bullet into your brain.”

Among the baseless conspiracy theories that Greene espoused were that Jewish super lasers started the 2018 California wildfires and that 9/11 and the Parkland and Sandy Hook school shootings were staged events. She also supported posts calling for the execution of Democratic leadersheip, including House Speaker Nancy Pelosi.

The House voted 230-199 to remove Greene from her committee assignments, with 11 Republican House members voting with Democrats. McCarthy was not among them.

Watch the “Morning Joe” clip below: