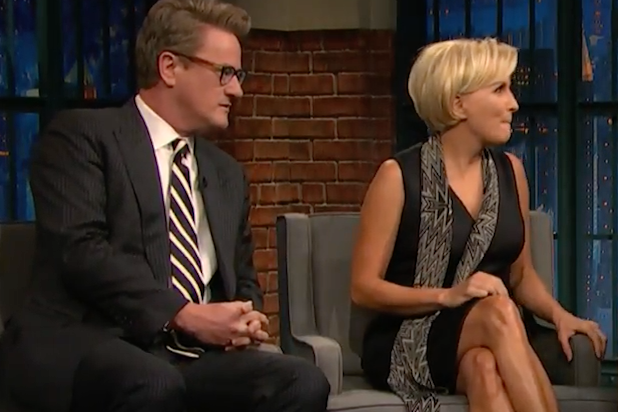 “I’m sorry,” Scarborough tweeted Wednesday night, and then implied that Brzezinski punched him in the face and got one of his teeth caught in her fist. But it appears all is well with the MSNBC duo.

They aren’t on air today, but it was planned time off and they’re scheduled to be back on “Morning Joe” on Tuesday, according to an MSNBC spokesperson.

Me: I'm sorry
Mika [Pulling a tooth out of her fist]:
Don't sweat it.

Also Read: 'Morning Joe' Co-Hosts Spar Over Ivanka Trump 'Cheap Shot': 'You Don't Have to Be So Snotty'

The “Morning Joe” set probably became extremely awkward during commercial breaks on Wednesday when Scarborough sparred with his long-time co-host.

He was in the middle of explaining why he’s actually more comfortable with Ivanka Trump and Jared Kushner having the President’s attention than others close to the Commander in Chief — actual qualifications be damned.

“Better her and Jared than, let’s say, some other people who had his ear through the end of the campaign.” Scarborough said. “Things are going better on the National Security Council. That didn’t just happen. There was a battle inside the White House and guess what? Jared and Ivanka won.”

“It would be unreasonable to say that there are not any goods that might follow from nepotism, but it’s still nepotism,” panelist Eddie Glaude Jr. responded.

Of course, that’s something that isn’t unheard of in politics — or even the White House — and Scarborough has seen some good come from the frowned-upon practice.

Also Read: 'Morning Joe' to Jeff Sessions: 'You Don't Talk About the NYPD That Way' (Video)

“My political hero was appointed Attorney General for his brother, and Republicans didn’t like that back then,” he said. “I think if you looked at Bobby Kenendy’s record, you’d say some good things came out of that.”

“So you’re comparing Ivanka Trump to Bobby Kennedy?” Brzezinski interrupted, which didn’t go over too well with the main guy.

“You don’t have to be so snotty. I was about to say, you din’t let me get it out. You don’t have to be so rude,” Scarborough sassed back. “The fact of the matter is that they are not Bobby Kennedy — as I was about to say — but you wanted to get your cheap shot in so you got your cheap shot in. No I am not saying Jared and Ivanka are Bobby Kennedy.”