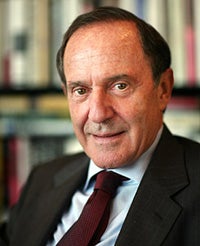 When moguls move their money around, people notice.

Mortimer B. Zuckerman, the media and real estate mogul, indicated last week that he would sell a million shares of Boston Properties – worth about $50 million – and reinvest that money in printing presses for the New York Daily News, according to a report in the Wall Street Journal.

The Journal hinted that Zuckerman’s play could mean that he thinks the real estate stock is at a high water mark. A spokesperson for Boston Properties, though, scoffed at that idea, pointing out that the sale represents just 9 percent of Zuckerman’s total stake.

But I’m wondering if it means Mort is thinking big about print, at a time when most newspapermen are hedging their bets.

A rep for the Daily News did not return a phone call seeking comment from Mr. Zuckerman.

Could he be following the lead of the San Francisco Chronicle, which recently closed its printing presses and outsourced all of its printing to a new $200 million plant in Fremont, California? (Not in its outsourcing, but in its approach to higher newsprint quality.)

The Hearst-owned Chronicle boasted to its readers the new plant will do “for newspapers what high-definition has done for television,” allowing the paper to “compete effectively against the imagery of the Internet.”

The hyperbole didn’t stop there. “The Voice of the West is about to embark on a bold new era that could provide a model for how daily newspapers can thrive in today’s market,” is how the Chronicle put it last month. “Beginning today, the newspaper will be printed using full-color presses and acquire some of the characteristics of a daily magazine — a showcase for the dramatic use of sharp, crisp photographs, graphics and advertisements.”

“It’s like they zoomed ahead to the 1990s,” Ken Doctor, an analyst at the research firm Outsell Inc., quipped to the New York Times in July.

Chronicle publisher Frank Vega, lead-chugger of the Broadsheet Kool Aide, went even further: “People are going to reacquaint themselves with newspapers."

Does Zuckerman’s funds-shift mean he thinks the same thing?

“They are investing in print at an odd time,” Doctor told me today. “Print is very mature; mass market is on the decline. Part of it the last 18 months has been the recession, but it doesn’t mask the permanent downsizing of newspaper advertising.”

If he’s really hoping an investment in the Daily News printing facilities is going to be the start of a tourniquet for America’s sixth largest daily newspaper, it’s got a lot of blood to stop – and not just in advertising. 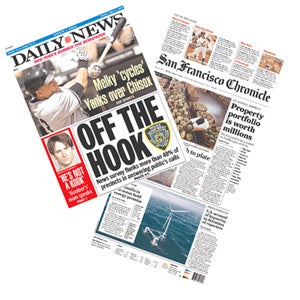 The average daily paid circulation for Zuckerman’s Daily News was 602,857 for the six months ended March 31, according to the Audit Bureau of Circulations. That’s down more than 14 percent from the same period a year ago. The Chronicle was down 15 percent.

Paid circulation at the rival New York Post was off more than 20 percent, according to ABC.To be sure, the Daily News has always been part of Zuckerman’s “personal war with the Post, as well as a business,” Doctor said. Investing in new printing presses is “unique” for the New York market, he said, yet “it is still the tired part of the industry.”