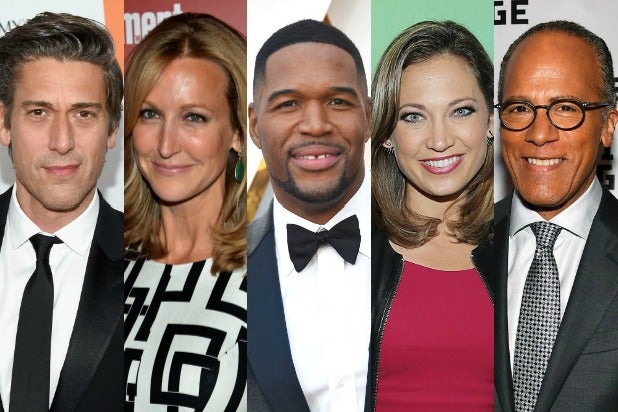 You like David Muir! You really like him! Muir, the anchor of ABC’s “World News Tonight,” is our nation’s most-liked TV media personality, according to TheWrap‘s latest study of Q Scores.

The anchor’s ratings reflect America’s ongoing love affair. “World News Tonight” is now the most-watched newscast in the country, having won last season in total viewers for the first time since Peter Jennings anchored the program 21 years ago.

Muir, who took the newscast over on September 1, 2014, has grown his overall audience by 448,000 viewers per night, on average.

It’s worth noting here that although NBC’s Lester Holt still wins in the key news demographic, adults 25-54, Muir has closed that gap by a huge 46 percent compared with last season.

Muir’s strong Positive Q Score of 25 ranks him well ahead of Holt, who has a strong 18.

Q Scores, by the way, are an entertainment industry-used measurement of a celebrity or a brand’s likability. The higher the Positive Q Score, the more the 25- to 54-year-old survey respondents marked the individual or company as being among their favorites. The lower — well, you get it. Fortunately for Muir, he doesn’t have to worry about that possibility.

Muir’s 25 ranks him a full four Q Score points ahead of a mini logjam in second place.

Fox News host Chris Wallace, “Good Morning America” co-anchor Lara Spencer and “CBS Evening News” anchor Jeff Glor all have a 21 Positive Q Score, though only Wallace — with a 31 Familiarity score — is better-known to the general public than Muir (a 25 for Familiarity too).

CBS’ John Dickerson is the fifth most-liked TV media personality, with a 20. It’s worth noting that both Dickerson and Glor Q Scores are considered unstable because their Familiarity is under 20 (each is at 10 on that measure).

So those are all strong likability. If you want to see a bad Q Score, click here.

TheWrap researched the Q Scores of 30 well-known television media personalities and hosts and ranked them in the gallery below.

For the record, we technically looked into 57 total TV news personalities, but almost half of them — including CNN’s Don Lemon and Fox News Channel’s Laura Ingraham — did not yet have Q Scores.