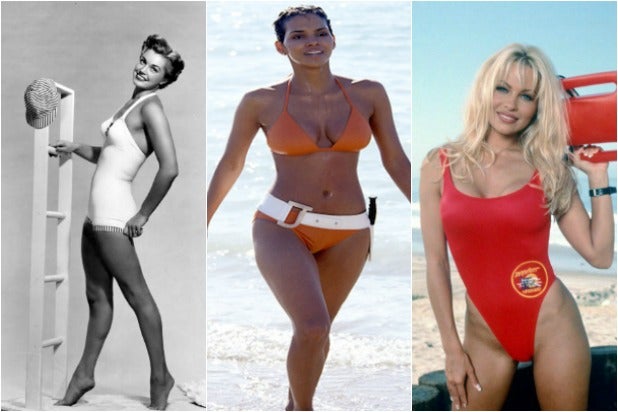 Getty Images/MGM/Twitter
Let's take a look back at some of the most iconic swimsuits (both one- and two-piece) in film and television, from the 1930s to the present. 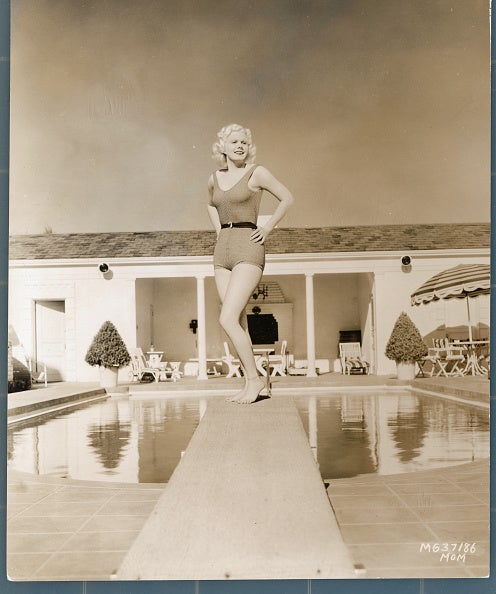 George Rinhart/Corbis via Getty Images
1930s: Jean Harlow    In the 1930s, before her death at age 26, film actress Jean Harlow was a Hollywood sex symbol. According to Redbook, she was also one of the earliest stars to be photographed in a swimsuit. 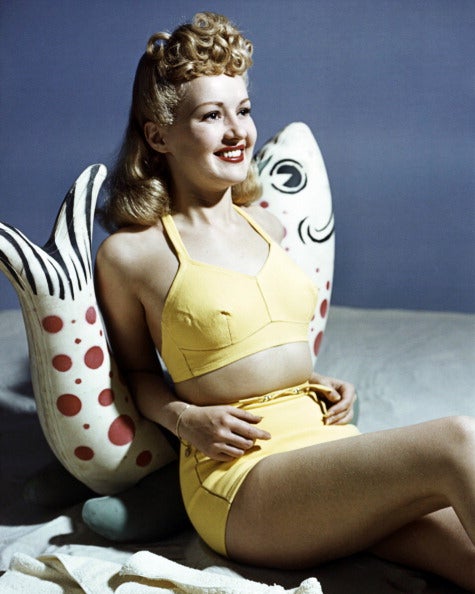 Silver Screen Collection/Getty Images
1940s: Betty Grable    Betty Grable was celebrated in the 1930s and '40s for her "million dollar legs." Though this yellow bikini is not as famous as Grable's famous one-piece and high heels attire, it's iconic in its own right. 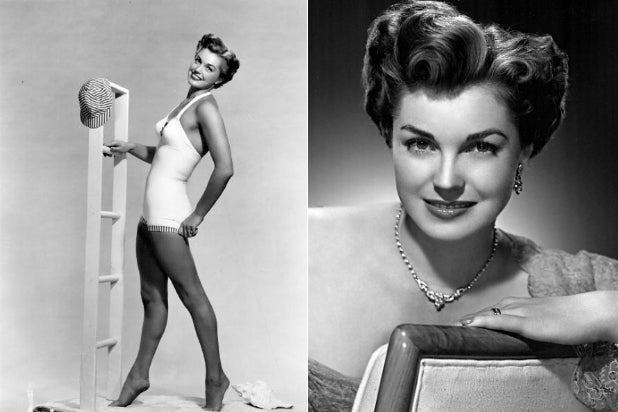 1950s: Esther Williams    Esther Williams' prowess as an actress and a competitive swimmer launched her to fame in the 1950s. She posed for many bathing suit-clad photos over the years, including this one from 1950. 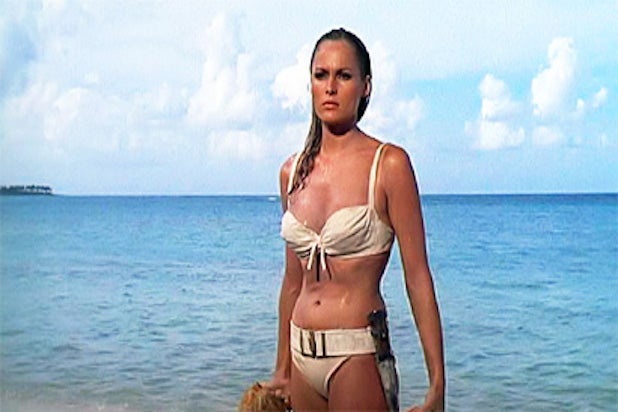 United Artists
1960s: Ursula Andress    This Swiss actress catapulted to fame as the first Bond girl in the 1962 film, "Dr. No." The scene where Andress rises out of the ocean in this white two-piece is considered one of the most iconic in film history. 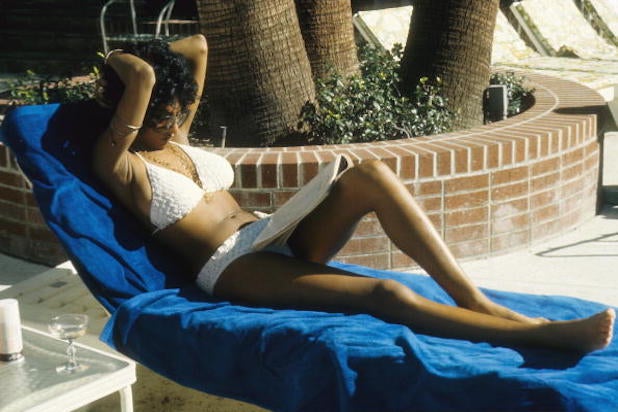 Michael Ochs Archive/Getty Images
1970s: Pam Grier  In addition to starring in "The L Word," Pam Grier was also an iconic figure in the 1970s. She starred in "blacksploitation" films, like "Foxy Brown" and "Sheba Baby." In this photo from 1975, Grier lounges by the pool in what InStyle describes as a "super-'70s macramé triangle top." 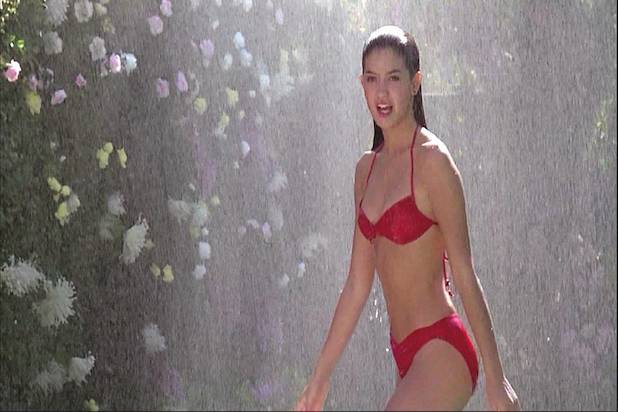 Universal
1980s: Phoebe Cates  Phoebe Cates sported this red bikini in her role as Linda Barrett in "Fast Times at Ridgemont High." The famous pool scene later inspired the music video for the song, "Stacy's Mom," by Fountains of Wayne. 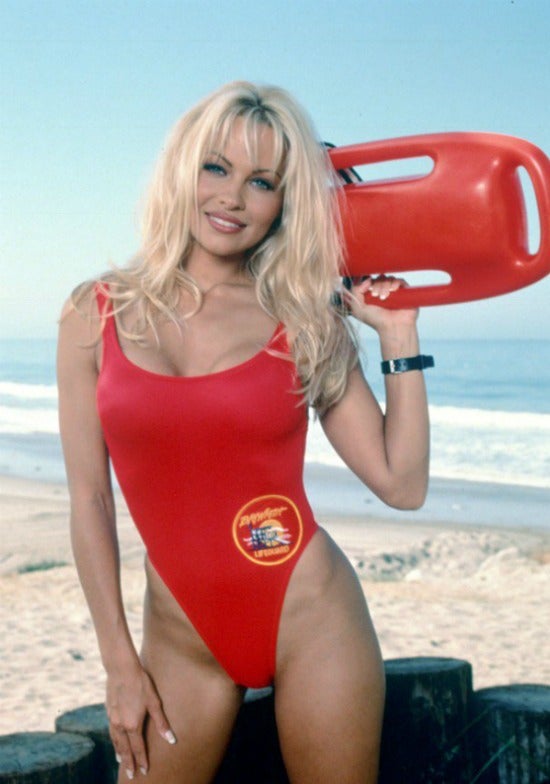 Twitter
1990s: Pamela Anderson  Pamela Anderson, who played lifeguard C.J. Parker on "Baywatch," helped re-popularize one-piece swimsuits in the 1990s. Variations of this red suit are still sold by retailers, such as Forever 21 and Zara. 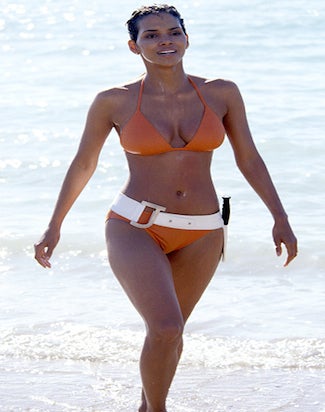 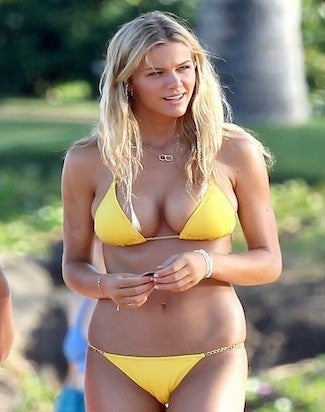 Sony/Columbia
2010s: Brooklyn Decker  Actress and model Brooklyn Decker sported this yellow bikini in the 2011 film, "Just Go With It." She also appeared on the cover of Sports Illustrated Swimsuit Issue in 2010. 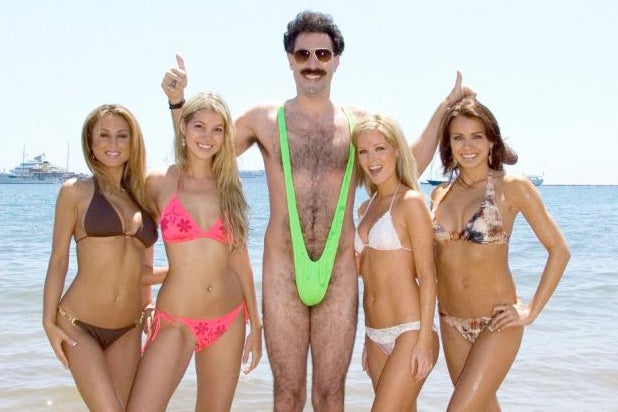 Fox
Runner-up: Sacha Baron Cohen  The actor Sacha Baron-Cohen made a memorable splash in the 2006 comedy "Borat" with his fluorescent-green mankini.
KEEP READING..