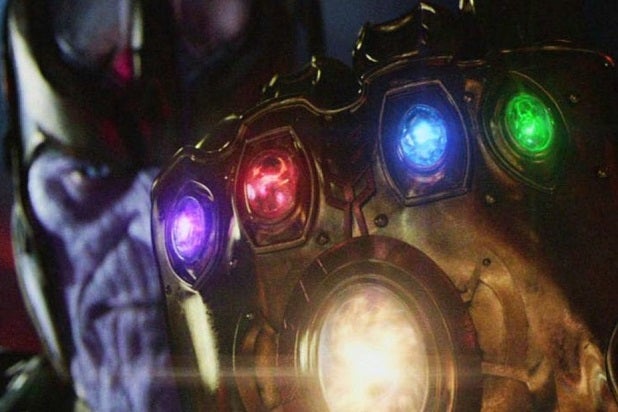 We’ve been obsessing over the ending to “Avengers: Infinity War” for days now, trying to understand just what that shocking outcome could mean. How in the world do they come back from this bleakest of defeats for “Avengers 4?” We’ve looked something like this:

me already coming up with theories for avengers 4 pic.twitter.com/DVHVLrQVrU

A lot of other people came out of the film obsessed too. Fans are all over it with their own theories for what happened in “Infinity War,” and what it means for the future of the Marvel Cinematic Universe. And we’ve compiled some of the more believable “Avengers” fan theories we’ve heard so far. It could be a combination of some or all of these that turn out to be true. Or maybe none of them! But that’s the fun of this franchise in the first place.

Of course, it hardly needs to be said again but “Avengers: Infinity War” spoilers ahead.

TheWrap broke down this idea in great detail here, so we’re obviously partial to it. Here goes: Close to the end of “Infinity War,” Doctor Strange uses the Eye of Agamotto (AKA the Time Infinity Stone) to look into the future at all the possible outcomes of their battle with Thanos. He sees 14 million scenarios but only one in which they win. Shortly after, Strange then does a couple of, well, strange things. First, he doesn’t stop Peter Quill from losing it out of grief over [REDACTED]’s death, which then screws up their plan to subdue Thanos and steal the Infinity Gauntlet. And then, despite having earlier said he would never give up the Time Stone even if it meant everyone dying, he turns it over to Thanos to save Tony Stark’s life. This allows Thanos to head to Earth to get the final Infinity Stone, then snap his fingers and wipe out half of all life in the universe. Whoops.

Tony – and frankly, the whole audience — wants to know why the hell Strange did that. Just as Strange starts to fade to dust, he tells Tony “this was the only way”. In other words, it looks like out of the 14+ million scenarios he saw, the one in which The Avengers win required Strange to turn over the Stone, allow Thanos do kill half the universe, (and probably to save Tony’s life).

*DO NOT READ if you haven't seen it yet*

… Why he didn't use his time ability at all, why he gave the stone to Thanos freely and why he told Tony "it had to happen this way"

Waiting for the next one to come out so I can say I called it ????

Everyone who disappeared is just trapped in the Soul Stone

This is one of our favorite “Infinity War” fan theories. So what exactly is the Soul Stone? It’s not entirely clear, but it appears to connected to the afterlife in some way. The Marvel Comics equivalent of the Soul Stone, called the Soul Gem, actually houses an idyllic pocket dimension, the Soul World, where the souls of people associated with those who control the Soul Gem live after their bodies are destroyed. They aren’t dead, exactly, since they technically haven’t progressed to the actual afterlife.

You can guess where this is going: In “Infinity War,” after Thanos snaps his fingers, he appears in some kind of spiritual realm (and we’re pretty sure this is totally different from the “Quantum Realm” that will be explained in more detail in “Ant-Man and the Wasp”) and encounters Gamora as a child. If the Soul Stone works like it does in the comics, then this probably wasn’t Thanos having a comforting vision, but him talking to the actual soul of the recently-deceased Guardian of the Galaxy? Which means — PERHAPS — everyone who disappeared isn’t literally dead, but their souls are trapped and confined to this realm.

(A confession: This theory is also in our list of the wildest “Infinity War” fan theories. It falls into the school of “s0 crazy it just might work.”)

My theory is that they are trapped inside the soul realm. A pocket universe inside the soul stone. Not dead but their physical bodies are erased from this realm. Avengers 4 is rumored to be a big time travel movie so it’s up in the air.

This “Avengers” fan theory has actual evidence to back it up. Some paparazzi set photos revealed Captain America, Tony Stark, Thor and Loki all back in the uniforms they wore in the original “The Avengers.” But they can also be seen there with Ant-Man wearing matching watch, doohickey looking things. Sure does look like they’ve traveled through time back to the Battle of New York, and that Ant-Man factors into “Avengers 4” in a big way after being MIA during “Infinity War.”

Why? Like because “The Avengers” was where Thanos first meddled in the affairs of humanity. Maybe the plan is to take him out at the start of his quest for the Infinity Stones.

So the current theory is that the remaining Infinity War (2018) survivors went back in time to the events in The Avengers (2012) to warn and take preemptive action against Thanos. CANT WAIT!!!! pic.twitter.com/Ewt9PdDm97

My theory is that the team goes back to this battle because they know this is when Thanos began his plot to destroy them. So, instead of only Iron Man flying into the portal, they find a way to all go, and they take the battle to Thanos before he is prepared for it.

Remember, Thanos’ whole plan was to get the Space Stone — AKA the Tesseract with Loki’s help, which is why Loki used it to create a wormhole in the sky above New York.

Thanos tries to bring back Gamora

When Thanos sees the young Gamora in his vision, she asks him what he had to give up to achieve this. “Everything,” he replies. Maybe he does care! And given his newfound invincibility, he may attempt to use the Time Stone to revive Gamora. Though that could end badly for him if it means the Avengers can take advantage of the time travel.

SPOILER ALERT! !!!!:
Theory for the the next avengers!
•
•
•
•
•
What if Thanos uses the time stone to go back to get gamora and inadvertently brings back the avengers and they kick his ass and that’s why strange gave it to him bc he saw what he’d do #AvengersInfinintyWar

This shot from a trailer wasn’t a misdirect at all

This is a little less plausible but still fun. Check out this shot from the trailer in the tweet below, where, for one thing, we clearly see The Hulk running when in the scene actually included in “Infinity War,” it’s actually Bruce Banner in Tony Stark’s Hulkbuster suit instead:

okay I have an avengers 4 theory and it’s what if this scene is actually in avengers 4, and it’s actually the re-do of infinity war's ending battle of wakanda, we know a4 involves time travel or something like that so this could be them fighting thanos and his army again pic.twitter.com/eANarKX0c9

Now likely, this shot is either clever marketing (we’re pretty sure they deliberately changed a few tiny details to avoid spoilers) or simply footage that ultimately didn’t make it into the film. (Though we think we know where things are going with The Hulk.) But what if this theory is right? If we buy that time travel factors into the sequel in some way, then this shot may still actually exist in the MCU, but showing up in “Avengers 4” instead.

This would be the heaviest of outcomes, but it makes sense, and we elaborate on it here. Captain America mentions several times in the film that “we don’t trade lives,” and so much of “Infinity War” is about sacrifice and the consequences of our choices. But he and the other Avengers may have to pay the ultimate price, trading their souls and lives for those of the next generation of heroes. The post-credits sequence pays heavy homage to “The Leftovers” or “Left Behind,” and while Marvel isn’t likely to go as dark as those movies, that path for “Avengers 4” seems to gel with those themes. It makes even more sense considering that on the business end of things, the contracts for the major Avengers are all up after the fourth movie.

Infinity War \ Spoiler Theory
.
.
.
.
.
The phrase “We don’t trade lives” kept getting used. The people that faded were newer members (in front of loved ones) & the originals stayed. I keep thinking that in A4 there’s gonna be trade off of SOME lives for others. A soul for soul.

Where does “Ant-Man and the Wasp” baddie Ghost rank?

Marvel has a villain problem. Or until incredibly recently – they HAD a villain problem. A decade’s worth of the most bankable films and memorable heroes Hollywood has to offer, yet they struggled in being able to pit the Avengers against a scene-chewing super villain on par with the Joker, Bane, Doc Ock or Magneto. And no amount of asterisks is going to make those last two part of the MCU. Given that the villains are almost never the best part of a Marvel film, we decided to look back at which ones surprisingly worked, and which ones certainly did not.

(Please note: We’ve included the major villains in this roundup, so no Laufey, Mandarin, Dormammu or Tony Stark circa “Civil War")