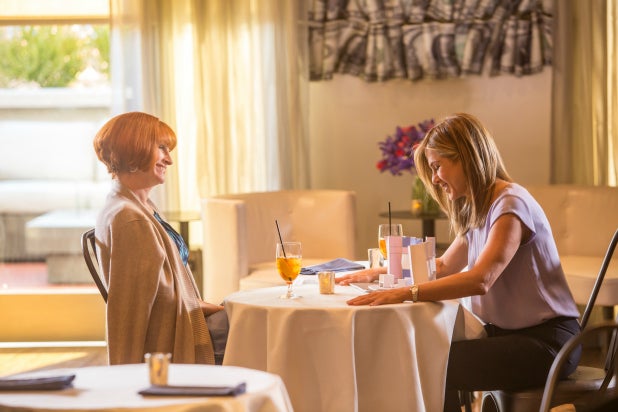 With “Valentine’s Day,” “New Yea now “Mother’s Day,” director Garry Marshall has officially become the worst thing to happen to holidays since “The Christmas Shoes.” The man who once brought “Love, American Style” and “Laverne and Shirley” to the small screen continues to operate with least-objectionable-programming in mind, making another movie that’s too innocuous to inspire actual rage yet too utterly tepid and bland to elicit a single laugh.

This is the sort of brightly-lit work where everyone from interior designers to struggling waitresses owns spacious, artfully cluttered homes with patios — mean divorced dads live in modernist blocks that resemble bank branch locations — and where suburbanites can fill their backyards with pricey party-store rentals at the drop of a hat. Throw in a Folgers Coffee can with the label turned to camera, and “Mother’s Day” would be a Hallmark Channel original movie.

(Fret not, though, fans of product placement — nearly every public space in this movie offers bottles of Fiji water and TVs tuned to the Home Shopping Network.)

While screenwriters Anya Kochoff Romano (“Monster-in-Law”), Matt Walker and Tom Hines dial the action down from the cast of dozens featured in Marshall’s previous assaults on the holidays, there are still enough characters to ensure every single one will be a cursory outline of a human being. 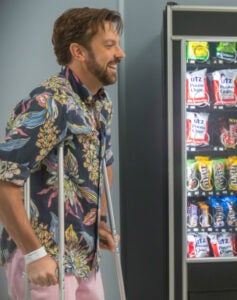 There’s divorced mom Sandy (Jennifer Aniston), whose friendly relationship with ex-husband Henry (Timothy Olyphant) hits a bump when he gets remarried to the much-younger Tina (Shay Mitchell, “Pretty Little Liars”); widowed Bradley (Jason Sudeikis), is unsure of how to cope with seeing his daughters through their first Mother’s Day since the death of their mom (Jennifer Garner) in Afghanistan; would-be comedian Zack (Jack Whitehall) wants to marry girlfriend and mother of his child Kristin (Britt Robertson), but she has unresolved issues over being given up for adoption by her birth mother, who turns out to be the staggeringly popular HSN host Miranda (Julia Roberts, sporting one of the worst wigs in the history of cinema — or the history of hair, for that matter); and sisters and neighbors Jesse (Kate Hudson) and Gabi (Sarah Chalke) have to ‘fess up about their relationships (Jesse is married to a person of color, Gabi to a woman) when their racist, homophobic mom Flo (Margo Martindale) pays them a visit.

It is no spoiler to reveal that every possible complication or difficulty in this movie resolves itself in the most pat, predictable and dully cheerful way possible, with lessons learned and hugs distributed. Along the way, we are assaulted by unfunny one-liners, groan-inducing slapstick, and a bevy of famous faces either phoning it in or being placed in outright embarrassing situations. Seeing the great Martindale grapple with material this weak is like witnessing a tagger being unleashed onto Mount Rushmore, and certainly someone with the comic chops and timing of Loni Love deserves better than to be subjected to pole-dancing jokes.

The film constantly reveals itself as having no idea how human beings speak or behave, whether it’s the completely contrived hi-jinks involving Jesse and Gabi trying to keep their secrets, Zack’s painfully inane stand-up, or the sad little cardboard diorama that supposedly successful designer Sandy brings with her on a go-see. (“Mother’s Day” seems clueless about what it is that computers actually do, apart from Skype.)

There was a moment early in his film career when movies like “The Flamingo Kid” and the underrated “Nothing in that Marshall might leave the banality of sitcoms behind and mature into a competent comedic director, but his recent output has all the zest of room-temperature oatmeal. Women everywhere deserve equal pay, maternity leave, unrestricted access to family planning, and far better movies about motherhood than “Mother’s Day.”