The Academy of Motion Picture Arts & Sciences has issued its annual invitation list of new voting members. It has offered membership to 135 artists and executives.

Among the invitees this year is "Avatar" producer Jon Landau, who was passed over for an invitation after his "Titanic" swept the Oscars in 1998. 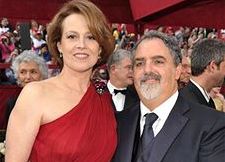 Landau (right, at the Oscars with Sigourney Weaver) told theWrap in March that his name had been submitted twice in the past, and he was rejected both times. “If they don’t invite me this year, that’s it,” he said, “I’m never going to join.”

Also on the list: "The Hurt Locker" nominee Jeremy Renner, whose inclusion was inadvertently revealed earlier this month at the Student Oscars, which Renner hosted.

An unusually large number of animators is included in this class of invitees, indicating the increasing importance of that genre in the movie business.

The text of the release, and the full list of those invited, follows:

Beverly Hills, CA — The Academy of Motion Picture Arts and Sciences is extending invitations to join the organization to 135 artists and executives who have distinguished themselves by their contributions to theatrical motion pictures. Those who accept the invitation will be the only additions in 2010 to the Academy’s roster of voting members.

“The work of these individuals has been appreciated by moviegoers all around the world,” said Academy President Tom Sherak. “The Academy is proud to invite each and every one of them.”

The Academy’s membership policies would have allowed a maximum of 180 new members in 2010, but as in other recent years, the several branch committees endorsed fewer candidates than were proposed to them. Voting membership in the organization has now held steady at just under 6,000 members since 2003.

New members will be welcomed into the Academy at an invitation-only reception at the Academy’s Fairbanks Center for Motion Picture Study in Beverly Hills in September.

Casting Directors
Laura Rosenthal – “The Messenger,” “I’m Not There”

Directors
Jacques Audiard – “A Prophet,” “The Beat That My Heart Skipped”
Juan Jose Campanella – “The Secret in Their Eyes,” "Son of the Bride"
Lee Daniels – “Precious: Based on the Novel ‘Push’ by Sapphire,” “Shadowboxer”
Claudia Llosa – “The Milk of Sorrow,” “Madeinusa”
Lone Scherfig – “An Education,” “Italian for Beginners”
Adam Shankman – “Bedtime Stories,” “Hairspray”

Documentary
Nancy Baker – “Rehearsing a Dream,” “Born into Brothels”
Rick Goldsmith – “The Most Dangerous Man in America: Daniel Ellsberg and the Pentagon Papers,” “Tell the Truth and Run: George Seldes and the American Press”
Davis Guggenheim – “It Might Get Loud,” “An Inconvenient Truth”
Tia Lessin – “Capitalism: A Love Story,” “Trouble the Water”
Cara Mertes – “The Betrayal,” “My Country, My Country”
Frazer Pennebaker – “Al Franken: God Spoke,” “The War Room”
Julia Reichert – “The Last Truck: Closing of a GM Plant,” “Seeing Red”
Morgan Spurlock – “Where in the World Is Osama Bin Laden?,” “Super Size Me”