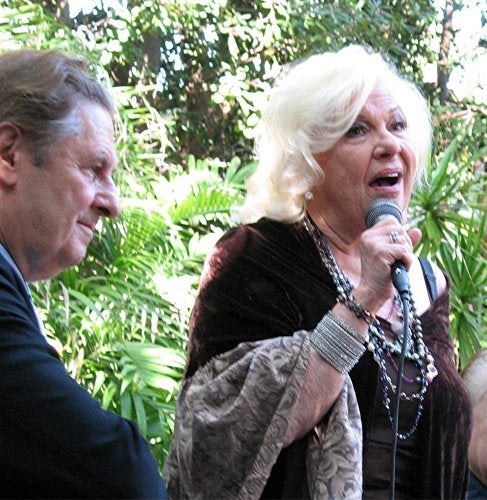 It wasn’t the moguls or reigning superstars who showed up at a hastily-organized fundraiser for the beleaguered Motion Picture and Television Fund Home.

Those guys seem to have run for the hills.

Instead it was a modest gathering of actors including Renee Taylor and Shirley Jones, Elliott Gould and Alan Rosenberg, who joined forces to raise money for the remaining residents at the soon-to-be-shuttered hospital and long-term care facility.

“It’s shameful that we’re here to bail out the hospital that serves this prosperous industry," said Marty Ingels, Jones’s husband (both pictured). "Where are the Steven Spielbergs and Angelina Jolies?”

There’s an old Stanislavski acting exercise that instructs students to stand in a corner and not think about a white bear. Few attending Saturday’s auction benefiting the remaining 60 residents of the Motion Picture Home, however, seemed able to ignore the obvious predicament facing those elderly residents who find themselves in a dire corner.

Unless the Motion Picture and Television Fund that operates the home can be persuaded or forced into changing its mind, the senior citizens who spent their lives working for Hollywood will soon be moving to outside nursing homes.

“This is a minor effort,” Taylor (pictured above with Bologna) told TheWrap. “It’s about caring for one another and showing that this can be done. We just want to make them comfortable.”

Elliott Gould (pictured), however, seemed to be thinking of the white bear responsible for the 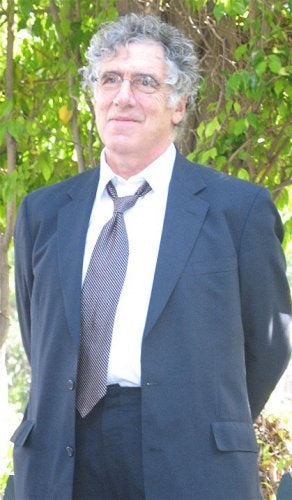 “Morally and ethically,” said Gould, “the people who are [at the Motion Picture Home] must not be sacrificed because of mismanagement.”

Hundreds of items crammed Taylor and Bologna’s house, and included scripts, books and posters signed by Stanley Kramer, Diane Ladd, Hugh Hefner, David Hockney, Carrie Fisher and others, as well as gowns, photographs and a director’s chair once used by Bill Clinton – and which came with a pre-intern photograph of Monica Lewinsky. Jayne Meadows also donated a collection of shoes. 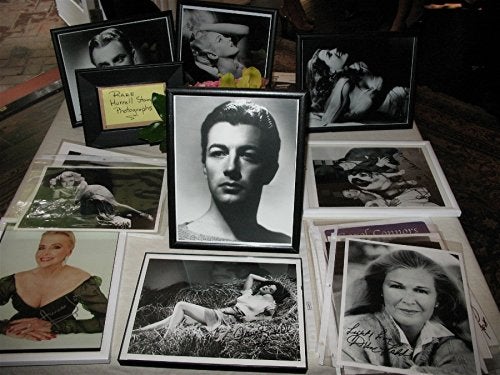 Bidding got off to a slow start, with two paintings by comedian Phyllis Diller fetching $500 apiece – one-quarter of what the artist said was their appraised value. But the auction then picked up steam as a bidding war drove up the price of an ornamental bottle prop from “I Dream of Jeannie,” donated by Barbara Eden, to $1,600.

While Taylor and her friends tried to downplay the heated politics surrounding accusations and denials that the MPTF is essentially evicting its most vulnerable residents, they occasionally bubbled to the surface.

“Spielberg and them raised $100 million for Israel like it was nothing,” Taylor addressed the bidders before the 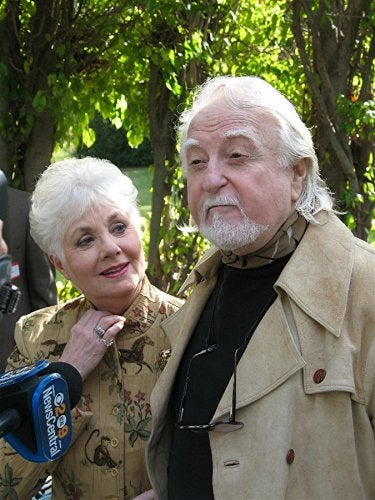 auction began. “I think we should just raise $100 million to keep the [home] open.”

Mentioning the MPTF controversy seemed unavoidable, since Taylor and others said they were raising money for residents who, they claim, are in need of wheelchair repairs, dentures and wigs. Spokespeople for MPTF have denied there are shortages of materiel and health services for LTC residents, even as the unit loses its nursing and support staff.

Taylor told the crowd that had gathered in the couple’s rain forest-like garden that she was inspired to hold the auction after a Christmas Day visit to the Motion Picture Home.

“I went there with a group to sing carols,” she said. “Me, a Jewish girl, singing ‘O Little Town of Bethlehem!’”

While Bologna was tapped to be the event’s auctioneer, his wife was soon chiding him for not holding onto items for longing bidding. 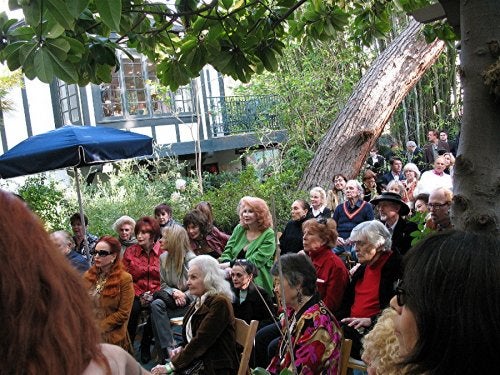 “No-o-o! Are you kidding?” Taylor interjected after Bologna opened bidding on one of several George Hurrell photographs for $50.

It was a comical routine that seemed to have been lifted from one of the marriage plays or films the pair have written and performed together.

“Jane Russell just signed it last night,” Taylor elaborated. “We went over to her house and got her to sign it!”