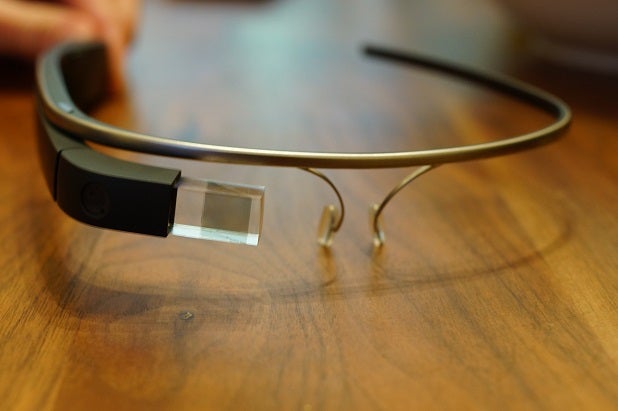 A moviegoer wearing Google Glass was removed from an AMC Theater in Columbus, Ohio, and questioned for an hour by federal authorities before being released after they determined he wasn’t recording “Jack Ryan: Shadow Recruit.”

The incident came to light when the man, writing anonymously on The Gadgeteer, told of being targeted on Saturday night with his wife:

“About an hour into the movie, a guy comes near my seat, shoves a badge that had some sort of a shield on it, yanks the Google Glass off my face and says ‘Follow me outside immediately.’ It was quite embarrassing and outside of the theater there were about 5-10 cops and mall cops.”

AMC responded on Tuesday, in a statement to TheWrap.

“Movie theft is something we take very seriously, and our theater managers contact the Motion Picture Association of America anytime it’s suspected that someone may be illegally recording content on screen,” a spokesman for the theater chain said.

“While we’re huge fans of technology and innovation, wearing a device that has the capability to record video is not appropriate at the movie theatre. At AMC Easton 30 last weekend, a guest was questioned for possible movie theft after he was identified wearing a recording device during a film.

“The presence of this recording device prompted an investigation by the MPAA, which was on site. The MPAA then contacted Homeland Security, which oversees movie theft. The investigation determined the guest was not recording content.”

The interrogation went on for more than an hour, said the patron.

“I was searched and more stuff was taken away from me (specifically my personal phone, my work phone – both of which were turned off, and my wallet). After an embarrassing 20-30 minutes outside the movie theater, me and my wife were conducted into two separate rooms in the ‘management’ office of Easton Mall, where the guy with the badge introduced himself again and showed me a different ID.”

He said the interrogating officer identified himself as “Bob Hope” of the “movie association.”

“Eventually, after a long time somebody came with a laptop and an USB cable at which point he told me it was my last chance to come clean. I repeated for the hundredth time there is nothing to come clean about and this is a big misunderstanding so the FBI guy finally connected my Glass to the computer, downloaded all my personal photos and started going though them one by one (although they are dated and it was obvious there was nothing on my Glass that was from the time period they accused me of recording). Then they went through my phone, and 5 minutes later they concluded I had done nothing wrong.”

He said they gave him four free passes to another movie at AMC for his trouble. But he didn’t get an apology, and that made him mad.

“All he said was AMC called him, and he called the FBI. I would have been fine with ‘I’m sorry this happened, please accept our apologies.’ Four free passes just infuriated me.”