Tuesday morning turned into a horror movie for Helios and Matheson Analytics, the parent company of MoviePass, with shares of the company dropping more than 30 percent after AMC blasted its business model.

The issue, according to AMC CEO Adam Aron on a late earnings call on Monday night, is that MoviePass is fronting movie ticket money for its users in order to amass a large customer base — and that means big losses. MoviePass paid $12.02 per ticket to AMC theaters in April, according to Aron, while its subscribers have been paying $9.95 a month and went to the movies on average 2.75 times per month. (Though last week, MoviePass rescinded its offer of one theater trip per day for subscribers paying $9.95 a month.)

The dig sent shares of the MoviePass parent reeling on Tuesday, crashing nearly 32 percent lower to $1.44 per share in early morning trading. 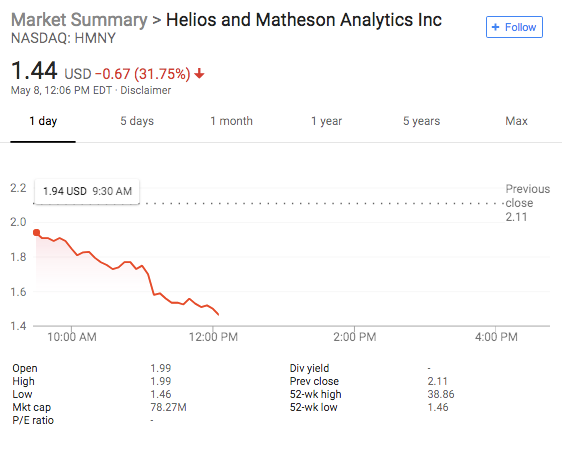 Aron has been critical of MoviePass in the past, and doubled down on his view on Monday, saying his views haven’t changed “one iota.”

“Just as we were fearing that the MoviePass price point was unsustainable in August, we have the same questions today,” said Aron. “$9.95 for up to 30 or 31 movies a month is not enough money to spread around MoviePass, Hollywood studios and theater operators.”

MoviePass has continued tinkering with its prices of late, moving to a movie-a-week plan for new customers for a few weeks, before switching back to its original $9.95 for a movie-a-day model. It also offers a $7.95 per month bundle option with iHeartRadio, allowing users to hit one movie per week.

“The fact that people are getting on board so fast shows that we’ve hit on something,” MoviePass CEO Mitch Lowe told TheWrap at CinemaCon in April. “And of course when something moves so fast, it’s going to be uncomfortable for a lot of people in the industry.”