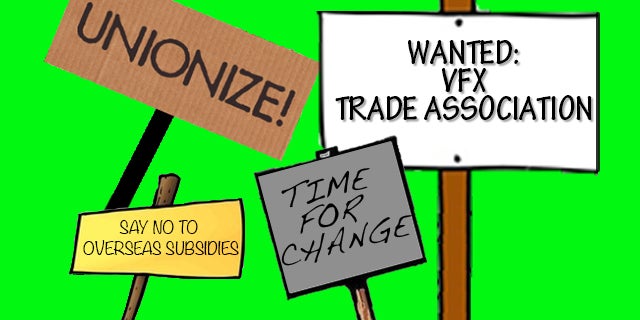 In the month since Rhythm & Hues imploded and filed for bankruptcy, many members of the battered visual-effects community have been agitating for change. But in a fragmented industry hit hard by the cost of doing business in a world of subsidies, cutthroat bidding and cheap foreign labor, the question on many lips is: what now?

Possibilities range from a union or lobbying organization to shaking up the way that visual-effects companies charge studios for their services. Industry executives and workers admit that it is still not clear how any positive change should manifest itself and what steps, if any, other visual-effects shops can take to ensure that they don’t suffer the same fate as Rhythm & Hues, Digital Domain or the half-dozen other California studios that have failed in recent years.

“The list of problems facing the industry are numerous, so there isn’t any one solution,” said Scott Squires, a visual-effects consultant who has earned Oscar nominations for his work on such films as “The Mask” and “DragonHeart.” “Those of us working in the industry love what we do: creating interesting images, partnering with great directors. You look at ‘Life of Pi’ and all of the work that we were doing last year and you go, ‘wow, that’s great.’ We’ve achieved a lot, and it should be a time for celebrating. But instead of popping champagne, we’re looking for change in the gutters.”

In response to the disruptions roiling the business, workers have festooned their Facebook and Twitter profiles with green avatars — a reminder of what major blockbusters would look like were it not for the pixilated wonders they conjure up in their cubicles.

Roughly 500 protesters rallied outside of the Oscars last month while a team from Rhythm & Hues captured an Academy Award for its work on Ang Lee’s “Life of Pi.”

On Thursday, Squires and other visual-effects workers will host three industry town hall meetings in Vancouver, Los Angeles and the San Francisco Bay Area. Christened “Pi Day,” the event will be broadcast via Google Hangouts.

How best to save the industry sparks intense disagreement. Many workers are hoping to seize the moment to unionize, while others believe that the first step toward forging a more sustainable industry is to create a trade association.

Steve Kaplan, labor organizer for the Animation Guild – Local 839, believes both steps are necessary, although he is currently devoting most of his energy to trying to get workers to sign enough union cards to bring about a vote on joining a guild.

“The visual-effects artists are at the lowest point downhill where the trouble has rolled due to a broken business model,” Kaplan said. “One thing that needs to be done to staunch the downward flow is to form a union as a barrier to abuses of overtime and benefits and to establish certain minimums and standards in the work place.”

Twenty years ago when special effects involved miniatures, models and masks, effects workers were represented by the props guild, the cinematographers guild or other production unions, according to industry veterans like Squires. When the digital transition happened in the 1990s, however, these workers found themselves without a natural union to cover their new computer-based skills.

Yet, some artists and executives question the timing. After all, many California shops are already battling shrinking profit margins, and because the cost of union contracts have not been baked into their bottom line, any extra expenses could push them to their knees. Moreover, the business has become global in scope as more countries like Canada and the United Kingdom have lured productions abroad by offering generous subsidies. Were a union to form, it would have a hard time being international in strength and membership.

“The unions here have failed miserably on every front,” said a visual-effects executive, who declined to be identified because of concerns it could jeopardize relationships with the company’s employees. “We’ve been competing for years with China and India, places where the labor is cheap and there are no unions. If we unionized in the states, we’d just drive what little remaining business there is overseas.”

Unions aren’t the only proposal on the table. Scott Ross, the co-founder and former head of Digital Domain and former general manager of Industrial Light and Magic, is reaching out to the heads of the major visual-effects shops to try to persuade them to create a trade association, like the Motion Picture Association of America. He thinks forming that type of organization will give the visual-effects shops the combined muscle to demand that studios stop requiring companies to submit fixed bids and instead pay them for any overages on projects.

It’s something Ross has been trying to accomplish for more than a decade.

“What’s prevented it from happening in the past, is that each one of the visual-effects facilities have it in their heads that there is not enough work, and the enemy is the other facilities, so the concept of sitting down at the table with the enemy is hard for them to get over,” he said.

“I feel like I’ve been standing on the deck of the Titanic screaming ‘iceberg,’ and they’re all dancing to Strauss in the main ballroom. But the ship is taking on water and hopefully they’ll recognize it before it’s too late.”

This time, Ross reports, he’s received stronger interest than ever, with more than 10 shops saying they’ll at least consider forming an association.

Not all of the businesses that are supportive of a trade association believe that it will be the panacea the industry needs. They agree that the way visual-effects shops are compensated for their work is ripe for an overhaul but argue that instead of working as contractors who submit bids, they should become co-producers on films or get back-end deals that give them some profit participation.

“It’s about changing the value proposition — and that’s not to be confused with asking filmmakers to pay us more,” said Mark Driscoll, president and co-founder of Look Effects, a 100-person shop that has worked on “Black Swan” and “Warm Bodies.” “There is plenty of money being spent. I think it’s more about discussing what our relationship is to the ownership risk and reward on a film.”

That’s what Digital Domain is doing. The company, which was acquired by Galloping Horse America and Reliance Media works for $30.2 million last September after going bankrupt, will work on the upcoming adaptation of Orson Scott Card’s “Ender’s Game” as a co-producer. Chief Executive Officer Ed Ulbrich thinks that if it’s successful, the model will be one that other visual-effects studios can embrace.

“We’re at an inflection point,” Ulbrich said. “It’s this quasi-industrial Darwinism kind of adapt or die problem. It isn’t the studios that’s the problem, it’s us. We have to rethink our business and align our interests with the filmmakers so we can participate in their success.”

One concrete step that is being taken is to push for more subsidies. Two weeks ago, the Visual Effects Society called on state leaders to pass new tax incentives designed to keep more effects work in Hollywood. The group is an honorary society, not a labor organization, with some 3,000 members. Its head Eric Roth told TheWrap in an earlier interview that even though he would like to see subsidies abolished, more needs to be done to keep California competitive.

California has tried to compete with other states and foreign governments by offering its own $100 million in tax credits annually. However, that pales next to states like New York, which offers $420 million a year in production-tax breaks, and countries like Canada, which defray a large chunk of a film’s visual-effects budget provided the work takes place in certain territories.

Yet the skepticism that has greeted news that the VES is calling for more governmental support exposes the deep fault lines that exist within the business.

“Although adding say half a billion [dollars] or a full billion to the film subsidies in California would bring a flood of jobs back to the Golden State, in the long run it would perpetuate a race to the bottom, which dismantles any hope to have a booming growth industry based on talent and branding rather than political whims,” Dave Rand, a visual-effects artist at Rhythm & Hues, said.

Nobody ever said there would be change everyone would agree on.