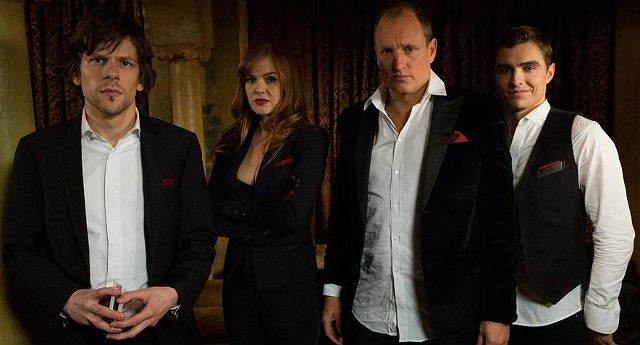 Summit's thriller "Now You See Me" follows a group of magicians who call themselves the Four Horsemen (Jesse Eisenberg, Woody Harrelson, Isla Fisher and Dave Franco) as they use varying techniques to pull off elaborate heists.

Mark Ruffalo co-stars as the FBI agent hot on their trail, while Melanie Laurent plays an Interpol agent who lends him a helping hand. The cast also includes Morgan Freeman as a magic debunker, as well as Michael Caine as the group's benefactor.

Also read: 'Now You See Me': Were the Critics Enchated?

Edward Ricourt ("Year 12") and Boaz Yakin ("Remember the Titans") came up with the story and penned the original script, which was then rewritten by veteran blockbuster scribe Ed Solomon ("Men in Black," "Charlie's Angels"). Louis Leterrier ("The Incredible Hulk") directed the globe-trotting movie, which features scenes in Las Vegas, New Orleans and Paris, among other exciting locations.

Ricourt and Solomon spoke with TheWrap in advance of the film's opening on Friday, when it will find itself competing with Sony's "After Earth" starring WIll and Jaden Smith, as well as the second frames of "Fast and Furious 6" and "The Hangover Part III."

So where did this project originate?
RICOURT: I started writing it by myself. It was a simple question of, 'if you were a magician, what would you do?' I went to some big ideas, like robbing banks, and started writing the script. Boaz and I had written a script a few years before so we reconnected and he asked what I was doing. I showed him pages and he connected with it and asked to join me, and I said 'great.' There are a lot of heists and problem solving in this movie and we wanted to ground it in reality, so Boaz was a good police office in making sure I didn't cheat. That's how it started. We took it to [Alex] Kurtzman and [Roberto] Orci and that's when it sold.

And Mr. Solomon, when did you become involved?
SOLOMON: I came on once the movie had been cast and the locations had been designed. I was there to carry out what Edward and Boaz designed. The studio wanted to bring a little more magic and comedy to the movie and they also had to address production issues, because they wanted some of the movie to take place in New Orleans. What kind of changes did you make to the script?
SOLOMON: I was writing more for specific cast and worked mostly on dialogue, to tailor the parts for certain individuals. I met with the actors and got their feedback. They were mostly trying to understand their characters, which changed a little bit, partially due to how it had been cast. Over the course of development, characters change, so the actors wanted to understand who the characters were as people. We had to design a specific magic persona for each one to understand what kind of magicians they were and what led to them to their profession.

Jesse and Woody are incredibly funny so we just tried to tailor the movie to the strengths. They cast great actors like Morgan Freeman and Michael Caine, so the question was, 'how do we take advantage of them more?' My job was to take the movie as it existed and mine the strengths and bring them to their fullest potential. Boaz and Edward had designed a terrific movie with a fantastic idea and it was a great serial collaboration. We've all been in close contact.

Edward, was it hard for you to hand your baby over to another writer?
RICOURT: I came to it as a learning experience. It was fun to see the characters grow and watch how they evolved. My script was about four guys, so Isla Fisher's character was originally a man. Then the process began and now there's a relationship between her and Jesse's character. I looked at it like a baseball analogy. I had pitched eight innings and Ed Solomon is going to come in and get the win, and the win is having the movie made and debut in 3000 theaters.

So it was a team effort?
RICOURT: Absolutely. In today's studio system, I think there's a collaboration that takes place. Ed took the script and it's not "Now You See Me" the musical, it's still "Now You See Me" the heist movie. If Ed comes in and gets the strikeout that wins the game, then everybody wins. I had sold a horror script while I was at NYU and then sold "Year 12" to Paramount and made the Black List, but I still hadn't had a script make it all the way to the finish line. To get a dream cast for my first finished film, I'm still trying to grasp that reality.

Was there anything about magic that you wanted to portray differently than other movies?
SOLOMON: I wanted it to not make fun of magic. I wanted it to have the feel and tone of a great magic show, where you suspend your disbelief and willingly allow yourself to be deceived for the sake of having fun and being entertained. You just smile and prepare to be fooled. It's a good-faith relationship between the film and the audience. They know it's going to play tricks on them but everyone knows that and is in on it. We wanted everything to feel like a magic trick and be structured as such. I didn't want to make fun of that, I wanted to embrace it and commit to the fun of it.

Were you satisfied with how the love story between Mark Ruffalo and Melanie Laurent develops or were there scenes that didn't make it into the movie?
SOLOMON: There was a lot more there for sure, but in a movie that's so densely populated with characters that ultimately, with the pace that it has, some of those moments fall away in service of a bigger movie, which is an action-packed thriller. Choices are always made. Stuff was pared down.

Edward, was it exciting for you watching such a talented cast come together like puzzle pieces that perfectly complemented each other?
RICOURT: As I was reading all these casting stories about actors being 'in talks and negotiations,' I was just hoping they'd stay on it. I told my wife, 'I'm not going to believe all this is really happening until I see the trucks and the cameras.' I was in a state of disbelief. I made sure to thank Morgan and Woody and Jesse and tell them how much it meant to me that they were in this movie, because I'm a fan of their bodies of work and now this is a part of those.

What do you guys make of the film's competitive release date and how it has been marketed?
SOLOMON: I'm not an expert in releasing movies, but I can tell you that the process of making the movie has been a real joyful one. The studio had a lot of confidence in it, which is why they put it out in the summer when there's a lot of competition. Summit and Lionsgate have been very supportive of the film and took a lot of care in releasing it. I truly appreciate it because they've been 100% behind the creative people involved in this movie.

RICOURT: It's crowded but hopefully we'll be some counterprogramming for the "Fast & Furious" crowd.

What's next for you guys?
SOLOMON: I'm working on a sci-fi movie for J.J. Abrams over at Paramount and I'm just finishing that. I'm also in the middle of a movie for Universal and Will Smith called "Colossus."

RICOURT: I'm working on a couple projects with Joe Roth and have various projects at the starting gate, including one based on the book "How to Defeat Your Own Clone."

Any last thoughts?
RICOURT: I just want to say it was really cool to work with producers who were also writers, because there's a language and a shorthand you can use about what's working and what's not. Kurtzman and Orci were really cool collaborators.

"Now You See Me" opens today in theaters across the country.