As the Motion Picture Television Fund’s donors arrived at the Fund’s annual star-studded “Evening Before the Emmys” fundraiser in Century City Saturday night, they could have been greeted by angry chants and signs comparing fund president Dr. David Tillman to Bernie Madoff.
But 60 or so protesters were placed two blocks away by police.
The protest was planned to protest the closure of the MPTF’s longterm care center, which has given about 100 long-term care patients until Thanksgiving to move to other facilities. 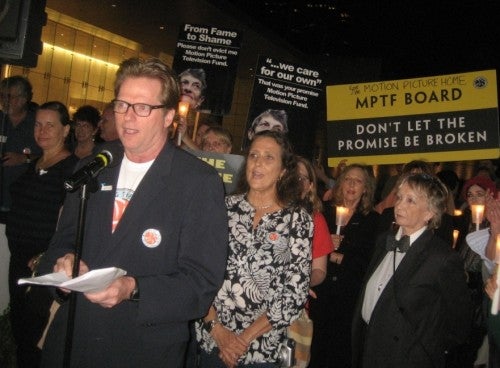 However, acting under the direction of event organizers, the LAPD stashed the small but vocal crowd that had shown up on the backside of the party’s city block far out of sight of the arrivals of such guests as fund chairman Jeffrey Katzenberg, and attendees like Christina Applegate, Kiefer Sutherland and Tina Fey.
Oddly, that landed the protest on CAA’s driveway on a desolate Avenue of the Stars.
A parade of speakers from SAG, WGA and the Teamsters — all careful to identify themselves as individuals, and not speaking on behalf of their respective organizations — took to the street-side microphone to ask the Fund to designate the $12 million shortfall needed to keep the center open beyond its now-slated November closing.
One-time “Little House on the Prairie” actor Dean Butler (pictured above; photograph by Mikey Glazer) rallied a banner-toting, candle-waving crowd of activists.
“When you look at that party, that may well have cost several millions of dollar to put on all by itself to raise $4 or $5 million tonight, it’s hard to imagine that that kind of effort could not be applied to raising $12 million more per year to save that house,” Butler said.
A little after 8 p.m., the protestors marched up and down Constellation Boulevard to Twisted Sister’s "We’re Not Going to Take It." At 8:45, the protestors tried to move to the valet area, but the LAPD held them at bay. By then, the crowd was down to about 25 diehards.

The MPTF made it clear before the event that it would not comment on the protest during the evening. However, in a statement earlier in the day, MPTF CEO Ken Scherer called the planned protest “regrettable” and pointed out that, “In some cases, the protestors themselves are the beneficiaries of the many programs and services provided by this charity.”

The group made no mention of the controversy in a late release issued during the event, instead highlighting the sponsors and celebrity attendees. They did not immediately announce how much money was raised.
x
Looks like you're enjoying reading