The resignation of Dr. David Tillman as chief executive of the Motion Picture and Television Fund may not be enough to save the Woodland Hills hospital and long-term nursing care facility whose closure he announced so peremptorily almost 13 months ago.

It may not be enough to satisfy critics of a board of directors which stood by Tillman (pictured above in a "Countdown With Keith Olbermann" segment) even as the weakest, most vulnerable residents of the MPTF campus were ordered to move out without warning and their outraged relatives staged an increasingly noisy — and successful — campaign to try to force the MPTF to backtrack. 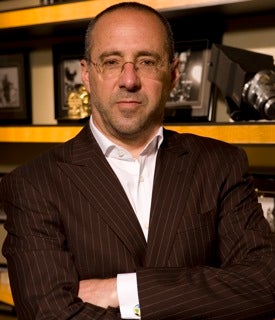 What the resignation does signal, though, is an acknowledgement – if a slow and reluctant acknowledgement — that the proposed closures were not in fact the result of some “perfect storm” of financial calamities outside the MPTF’s control, as Jeffrey Katzenberg and others tried to argue last year.

Rather, they came about because the MPTF facilities were mismanaged into the ground, as a result of decisions made by Tillman and the leadership culture he fostered over his decade at the helm.

TheWrap wrote about this pattern last April, detailing for example how Tillman decided in 2006 to close the intensive care unit of the hospital over the objections of his senior medical staff; how the loss of the ICU dealt a death knell to the hospital; and how the loss of the hospital threatened to slash MediCal payments to residents of the long-term care facility to such an extent that it would no longer be financially viable.

Nobody at MPTF has ever taken issue with that account. Slowly, over the past few months, senior figures have, in fact, acknowledged it.

In August, Katzenberg’s lawyer, Bert Fields, told TheWrap he couldn’t “speak to Tillman’s past decisions” — a subtle way of throwing at least his legs under the bus.

In October, the man now designated as Tillman’s interim successor, Bob Beitcher (above), wrote in an otherwise party-line blog for this site that the nursing home’s “business model accelerated its demise” — a slightly less subtle way of tossing Dr Tillman’s chest and arms under, too.

The official release announcing Tillman’s departure on Tuesday was tantamount to a public humiliation. He did not say he was leaving to pursue other opportunities. He did not even plead that he wanted to spend more time with his family. Rather, he was quoted saying, with remarkable bluntness, that he was getting out “in my own best interests as well as in the best interest of the Fund.”

Translated into English, this means he was fired — something a senior employee privy to at least some management decisions confirmed to me. “There is no question he would never resign on his own,” he said.

The spin coming out of MPTF circles Wednesday is that Tillman’s departure was strictly a matter of savvy PR. He was the fount of unceasing bad publicity, therefore he had to fall on his sword for the good of everyone else.

Another informed individual close to both the board and the nursing home residents and their families had a much blunter assessment.

Saving the Lives of Our Own, the protest group still hoping to keep the nursing home open, has retained the high-profile downtown law firm Girardi & Keese and has made no bones that something has to change if the MPTF wants to avoid a costly — and potentially shaming — lawsuit.

“The Fund has come to understand [the activists] are going to sue them if they continue along this line,” the individual said.

Saving the Lives of Our Own is now cautiously optimistic it can end what it sees as the cold, corporate, uncaring tone cultivated under Tillman’s leadership and launch a full-scale effort — including heavy fundraising in the industry — to restore the nursing home and everything else that has fallen by the wayside.

“For us to succeed, Tillman had to go. He’s gone. This is a step in the right direction,” the said group’s co-founder, Nancy Biederman. “We want to do everything we can to make this right.”

She invited the board to invite Saving the Lives of Our Own to participate in the search for Tillman’s permanent successor and restore the MPTF to its original mission of “taking care of our own."

For the moment, though, it looks highly unlikely that the MPTF will want to concede much more in a hurry. Beitcher, a former president of Panavision, is almost completely unknown to MPTF staff and residents, having served just two years on the board. And he has no known relevant experience in the field of residential care or medical administration.

Also important to note is that the board waited this long to ditch Tillman. “If they were going to do this,” the senior employee said, “why not at the get-go?”

Saving the Lives of Our Own is taking heart, though, that someone has finally been held accountable. As Biederman said, “It’s the MPTF’s lack of transparency, communication, responsibility and accountability to both its constituency and donors that has been most shocking.”