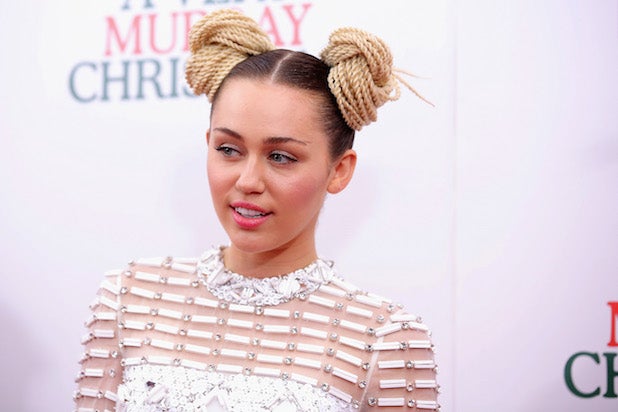 Miley Cyrus at her last red carpet event, which was for 'A Very Murray Christmas' in New York last December (Jemal Countess/Getty Images )

The people behind celebrity nude-scene site Mr. Skin have been accused of nakedly filching other people’s material for their own gain.

SK Intertainment, the parent company of Mr. Skin, Egotastic, WWTDD and other websites was slapped with a copyright infringement lawsuit alleging the wrongful use of a number of photos, including a photo of “Party in the USA” singer Miley Cyrus being spanked by the Easter Bunny.

“Defendant Mr. Skin also owns and operates the website www.egotastic.com which is the ‘leading online celebrity and entertainment destination site for the male audience 18-49’ and specializes in celebrity gossip,” the suit reads. “On information and belief, the site also gets 10 million monthly unique visitors and features extensive advertising. Additionally, Mr. Skin owns and operates the website www.wwtdd.com which provides ‘salacious’ content and gossip, mostly on celebrity women, and also features extensive advertising.”

The suit continues, “Defendants used the CPI Photos and the Lickerish Photos to drive interest to their subscription access website, www.mrskin.com, and to increase the potential for more subscriptions, as well as ad sales to both Mr.Skin.com, Egotastic.com, and wwtdd.com. Thus, Defendants acted with the purpose and goal of financial gain, despite being sophisticated parties, with full knowledge of the strictures of federal copyright law and the basic requirements for licensing the use of copyrighted content for commercial exploitation.”

The suit contends that that the defendants are well familiar with licensing requirements, given that they “are sophisticated parties who depend on the many licenses granted to them by major studios, including Universal and Fox, to publish and distribute nude or revealing clips of women from their films. “

The lawsuit also cites reports that Mr. Skin has licensed the use of its trademark for the 2007 Seth Rogen-Katherine Heigl film “Knocked Up.”

TheWrap has reached out to SK Intertainment for comment on the suit.

Exhibits for the suit cite multiple alleged infringements, in posts bearing titles such as “Nicole Kidman Sexy in the Water for Stellar” and “Miley Cyrus Spanked by Easter Bunn…ZZZZZ.”

The Cyrus picture was one of a number of photos taken of he singer taken by photographer Vijat Mohindra and published by Vogue last year, and which Creative says are in its library.

The suit is asking that the defendants be enjoined by the court from infringing on the plaintiffs’ copyrights, as well as unspecified damages.