A report in Crain’s New York that speculated Madison Square Garden owner James Dolan “may be laying the groundwork” for a sale of the NBA’s New York Knicks and the NHL’s New York Rangers has both long-suffering fans and MSG shareholders riding high on Friday.

On Wednesday, The Madison Square Garden Co. — the parent company that owns both franchises — announced that it is exploring a spin-off of the company’s sports businesses, which include the Knicks, the Rangers and the WNBA’s Liberty.

Shares of the Madison Square Garden Company are currently trading up nearly 3 percent as of 3:30 p.m. ET, which is more than $8 per share for the day — and those aren’t even the biggest gains of the week. From Wednesday’s close to Thursday’s open, shares of MSG leaped nearly 9 percent.

From Wednesday’s close to Friday’s high point (so far), shares in MSG have jumped 20 percent in just about a day and a half. That’s more than $50 per share for the pricey stock.

Here is a look at the last five days of trading: 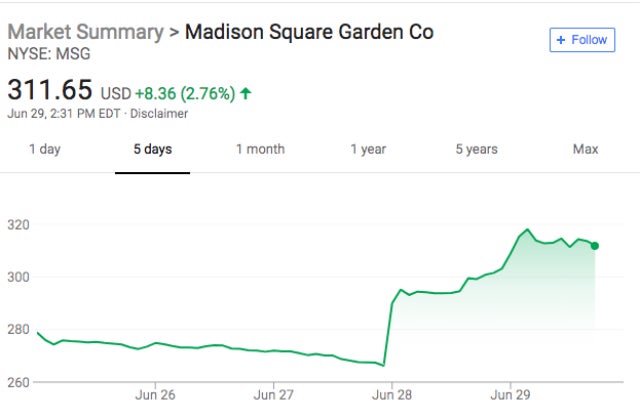 While the release stated that Dolan is expected to be the CEO for the new company, the Crain’s story said that putting all of his sports franchises into a separate company makes it easier to offload them. The Madison Square Garden Company said in a statement to TheWrap, “There are no plans to sell the Knicks or the Rangers.”

The financial outlet said Dolan is more interested in music — he is the frontman for blues band JD and the Straight Shot — and building entertainment venues. MSG would remain the owners of the Madison Square Garden arena and its Hulu Theater, Radio City Music Hall, Beacon Theatre and the Forum in Inglewood, California, among others.

Dolan assumed ownership of the Knicks in 1999, and, despite an unlikely run to the NBA Finals that year, the team has been the NBA’s punching bag during Dolan’s reign. Since 2001, the team has made just four playoff appearances, with only one series win.

It would be an understatement to say that Knicks fans were excited on Friday at the possibility of the sale.

LETS GO LIVE OUTSIDE MADISON SQUARE GARDEN FOR REACTION TO THE NEWS THAT JAMES DOLAN HAS LAID THE GROUNDWORK TO SELL THE KNICKS!!! pic.twitter.com/ZlkZESyu64

James Dolan selling the Knicks would be one of the great days in my history as a #Knicks fan. This is a fact.

Not hyperbole — news breaking that Dolan MIGHT sell the Knicks is the greatest moment for Knicks fans in 19 years (since LJ’s 4-point shot). That’s all you need to know about the James Dolan era.

While others thought it would be the perfect pitch for LeBron James, who just became a free agent.